I will never play this piece of music. It’s right up there with jumping the Grand Canyon flat-footed and breaking the sound barrier without an airplane.

In fact, I have to listen to hear it intelligently, and every time I hear it, I hear something else.

It’s Chopin’s Ballade No 1 in G Minor. I’ve taken to listening to it a lot lately, especially as it’s performed by various artists. It seems to speak of the times we are entering, at least to me.

Here is Chopin’s Ballade No 1, played in a grand manner by Rubenstein. This version includes the music so you can follow along as you listen. Be patient with it. There are a couple of written quotes at the first of it before the music begins. Notice how the Ballade changes constantly all the way through.

Here it is, performed by Lang Lang. I love to watch him as he plays. He feels the music, is transported by it. His playing is more lush, with big emotionality.

Here is a thoughtful interpretation by Martha Argerich. Do you hear the more introspective way she  approaches it, compared to Lang Lang, who is full-on with it? It’s also interesting to hear the difference in the pianos they use. Do you hear that?

This incredible piece of music talks to us through each of these artists, and what it says is a bit different, depending on which of them has control of it. Their genius shows in that whichever one of them is playing, they are not just pounding out notes. They have control — although you sometimes feel as if their control is just barely there — of the music in the notes.

I change my mind a lot about which interpretation I like best. They’re all so good, each in a different way. Do you have a favorite?

It amazes me that people can do this. Chopin heard this music before he wrote it, felt it before he heard it. These pianists are able to overcome the technical difficulties and complexity of this piece of music to master it to the point that they can then take it and put pieces of themselves back into it, making it their own.

We are wondrously made. Chopin wrote this wonderful music after the partition of his beloved country. He somehow managed to pull the longing, the chaos and the clash of this disaster out of the piano. The history of the Ballade alone nominates it as music for our times. But the Ballade itself reaches across the century and speaks of today as if then was now.

It is not a marching tune. You would break your leg, marching to this. I can’t even tell for sure which key it’s in a big part of the time. The Ballade is a technical power house that only a genius like Chopin could tame into a not-quite form.

As I said, I have to listen to even really hear it.

Such is the genius of the human being.

Of us, who are fearfully and wondrously made. 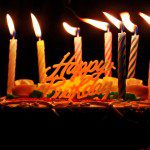 Application of 1 John 1:1-10 In Our Lives
There has been much said about the letter of 1 John and...
view all Catholic blogs
What Are Your Thoughts?leave a comment

3 responses to “Music for Our Times Sounds Like This”