Archbishop of Canterbury: Church May Split 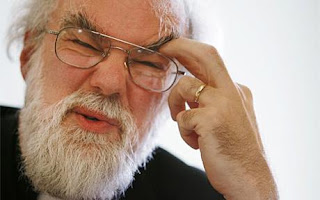 Chirpy Ruth Gledhill of The Times of London reports here on the ABC’s speech to General Synod. He points out that the Anglican Communion may very well split permanently over the consecration of women bishops and homosexuals. He envisions a two tier system in which some churches in the Anglican Communion are ‘in’ and others are ‘out’.

The split in the Anglican Church is much more profound than that. The split, as former Bishop of London, Mgr. Graham Leonard said in The Path to Rome, is between, “those on the one hand who believe that the Christian gospel is revealed by God, is to be heard and received and that its purpose is to enable men and women to obey God in love and through them for creation itself to be redeemed. On the other hand are those who believe that it can and should be modified and adapted to the cultural and intellectual attitudes and demands of successive generations and indeed originates in them.”

This is what divides Anglicans–not all the particular issues. Furthermore, this is also what divides the rest of Christendom–including the Catholic Church. The divide within Christianity is not even essentially between Protestant and Catholic, or between all the different Protestant denominations. The divide, as Mgr. Leonard so succinctly put it, is between those who believe the old time religion and those who do not.

The question should not be, “Do you think women should be bishops?” or “Do you think two people of the same sex can marry one another?” The question is, “Do you believe that Jesus Christ is the Son of God, born of a Virgin Mother, died on the cross for the salvation of a sinful humanity, rose again on the third day and is now seated at the right hand of the father?” The real question is, “Do you believe that the Father and the Son sent the Holy Spirit, established the Church as the sacrament of salvation and that the Christian’s sole purpose on earth is to love God, serve him, make his way to heaven and take as many others with him as possible.”

Christians of all denominations and traditions who fudge on these basic questions of belief will inevitably take either a radical or at least a soft line on the contemporary ‘issues’. That is because, whether they are conscious of it or not, they essentially believe that the Christian faith is not a revealed religion, but a relative religion. That the Church is not founded by God through his Son Jesus Christ, but it is a human and historical construct, and as such it needs to adapt to the changing needs of society.

This is the split Anglicans (and all other Christians) need to confront head on, and as far as my opinion matters, the sooner a radical realignment takes place within Christianity the sooner we will be able to get on with the Great Commission. What do I mean by ‘radical realignment’? I mean let those who have come to realize that they really do believe the old time religion join the One, True, Old Time Religion i.e. The Catholic Church, and let those who do not scamper off to join whatever sect suits them best.

February 10, 2010 The Benedictine Braid
Recent Comments
0 | Leave a Comment
"Catholicism has always defined the ideal but there are no limits on God's mercy and ..."
Guest Tony Palmer: Is There Salvation Outside ..."
"With all due respect, Shaun, are you relegating the actual Faith to whatever the local ..."
PGMGN Notes on Tony Palmer’s Funeral
"There are good parking valets and bad parking valets. There are good housesitters and bad ..."
Elliot Bougis The Case for Conversion to Catholicism
"did you vote for Bush Fr Longenecker? would you have?"
Petey Understanding Iraq
Browse Our Archives
get the latest from
Catholic
Sign up for our newsletter
POPULAR AT PATHEOS Catholic
1