Pachamama and the Pieta

Those who are following the Amazonian Synod in Rome will have heard about the furore over the feminine image first used in a tree planting ritual when the synod was kicked off, and which has since been used in various indigenous type rituals in Rome–including an Amazonian Way of the Cross yesterday.

Critics say the carved image of a naked, pregnant woman is the Peruvian Earth-Fertility Goddess Pachamama. Catholic defenders say it is an indigenous image of the Blessed Virgin Mary. Vatican spokespeople and clergy associated with the synod are ambiguous. Most deny that the image represents Mary the Mother of God. Others say it could be a symbol of Mary, but it is to be seen as a symbol of life and goodness while they deny that it is Pachamama per se.

Paganism is, by its nature, mythological not dogmatic. It is amorphous, ambiguous and open ended. If the image is not Pachamama, I think it is safe to say that it is, at least in general terms, an image of fertility and life that comes from a pagan, nature centered spirituality. In other words, it is some sort of Earth Mother image, and if we must give her a name, it seems to me that Pachamama is as appropriate as any.

What interests me more is the relationship between this image and traditional Catholic art. There is, of course, a rich history of portrayals of Mary in Catholic art. The most sublime are the Madonnas by Michelangelo, Raphael and Botticelli.

Indeed, the Pachamama image is now at Rome and used in a ceremony just a few hundred yards from Michelangelo’s Pieta–which is displayed just inside the entrance to St Peter’s basilica.

Putting aside the pagan context and use of the Pachamama image, how can we compare the image to the Pieta as art?

This is an interesting question because there is a trend among art critics and historians to go down the path of cultural equivalency. In other words, all art and crafts from any culture are of equal value. All must be respected on a level playing field as equally worthy. To do otherwise is to claim cultural superiority, and that is a form of racism.

So, for example, a basket woven from palm fronds by a South Pacific indigenous woman must be treated with as much respect and awe as an Etruscan vase. A Buddhist temple is just as good as Kings College Chapel. A mosque must be equivalent to Brunelleschi’s dome.

It would consistent with this ideology therefore to equate Pachamama with the Pieta. One comes from an aboriginal culture. The other from Renaissance Italy. So what? They are both beautiful in their own way.

Maybe, but maybe not.

One of the things ideologues lack is that little grace called common sense.

Any ordinary person with common sense will look at a Baptist church operating out of a strip mall and Chartres Cathedral and say, “These two places of worship are not equivalent.” Likewise a grass hut with a cross on top in a jungle clearing is not the same as the Hagia Sofia.

This is not to denigrate what goes on in the Baptist trailer or the grass hut in the jungle, nor is it to make a judgment on the people who use those buildings–their faith or their morality.

It is a judgment on the standard of artistic or architectural accomplishment.

Likewise, we cannot place Pachamama and the Pieta on the same level. Artistically speaking Pachamama is crude. Pieta is sublime.

Theologically and liturgically the contrast is also interesting to ponder. Pachamama (or whoever she may be) is a symbol of fecundity, life and motherhood. That is worthy, and in a side observation, one wonders whether those who revere Pachamama are also passionately opposed to the crime of abortion–but that is another matter. So let’s say we see Pachamama and we affirm life in all its goodness. That’s fine, and that is congruent with the Catholic faith, but it is not unique to the Catholic faith. All people can affirm life, abundance, fecundity and motherhood.

In other words, in the Pieta we see expressed in one powerful and moving image all the doctrines of the Incarnation and mankind’s redemption. In that one image we see all the Marian dogmas carved with consummate craftsmanship from one solid block of marble.

In its attempts to value Pachamama, cultural equivalency denigrates the Pieta.

The wiser way is to listen to Thomas Traherne who says, “Can a person be just unless he values all things according to their worth.” We therefore value Pachamama for its worth and we value the Pieta for its worth, and thereby establish an appreciation of beauty that is just. 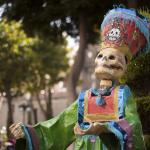