Lent in a Tent 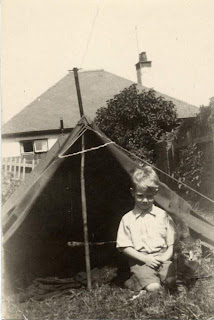 Have you ever spent Lent in a tent? As a young priest, living in England, I was exhorting the parishioners to take Lent seriously, and to be creative and cheerful in their self denial. With the radicalism of youth I said, “Do something extreme for once! Think of the desert fathers who left everything and went to live in a cave! Think of Jesus in the desert for forty days. Remember St Simeon Stylites who lived for thirty five years on top of a pillar in the Syrian desert! Go on! Do something radical and beautiful for God.

Preachers must be careful what they say for people are listening…especially little people. So Ash Wednesday came and went and then on Friday I had a phone call from a young mother of four children. “Father, I wish you hadn’t preached that homily on Sunday,” she said in a tone of slight exasperation. “Because Philip has decided to spend Lent in a tent.”

Philip was her ten year old son. A bright boy who sang in the choir and was always full of jokes and questions, Philip had been listening and taking it to heart. “What do you mean he is spending Lent in a tent?” I asked.

“He said he was going to live in the tent in the backyard all during Lent and he wasn’t coming out and I was supposed to bring him meals and books and whatever he needed. I don’t want to discourage him, but really Father, it is a bit much turning my son into a hermit!”

Later that afternoon I dropped in to see Philip. Sure enough, he was sitting happily in his tent in the backyard. This was late February and it was cold. He was bundled up in a sleeping bag wearing a woolen hat, reading a comic book with a mug of cocoa at his side. I climbed into the tent and we had a talk about Lent and came to a compromise. Philip would come out from the tent to go to school, wash and have meals with the family, but his mom said he could sleep in the tent every night if he wanted to.

So Philip spent Lent in a tent. I visited him a couple of times through the forty days and whenever he could he was ensconced in his canvas cave like a perfectly happy hermit. He read lots of books and I talked with him about prayer and I still remember it as one of the happiest Lents I ever spent.

The whole world will be better for it.

February 17, 2010 Three Weapons to Fight the Un-Holy Trinity
Recent Comments
0 | Leave a Comment
"Catholicism has always defined the ideal but there are no limits on God's mercy and ..."
Guest Tony Palmer: Is There Salvation Outside ..."
"With all due respect, Shaun, are you relegating the actual Faith to whatever the local ..."
PGMGN Notes on Tony Palmer’s Funeral
"There are good parking valets and bad parking valets. There are good housesitters and bad ..."
Elliot Bougis The Case for Conversion to Catholicism
"did you vote for Bush Fr Longenecker? would you have?"
Petey Understanding Iraq
Browse Our Archives
Related posts from Fr. Dwight Longenecker