The Infant of Prague and Childhood Innocence 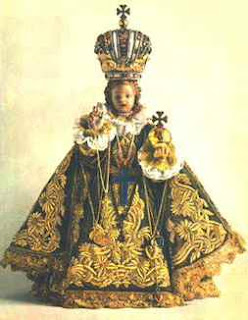 It was my privilege today to visit the National Shrine of the Infant of Prague in Prague, Oklahoma. (They pronounce it Prage). This was a very interesting stop because the pastor of the parish is a convert from Episcopalianism. Also, it was intriguing because I have to admit that the devotion to the Infant of Prague is not something which is, errr, shall we say,  immediately accessible to the male Evangelical convert to Catholicism.

Here’s how it happened: Catholics should understand that the Infant of Prague is very alien to the typical Bob Jones graduate…The first impression is, “Good heavens! Why is baby Jesus dressed up like that? Is that some kind of fancy Catholic idol or what?” But putting my prejudice on one side and wanting to ‘affirm and not deny’ I learned about the history of the devotion and was given a very nice tour of the shrine including a look at a cupboard full of all the different outfits they had for him. It prompted a question on the drive back, “Can you get Infant of Prague kits? You know, buy the baby in diapers and then you buy the outfits separately? What does baby Jesus wear under the royal robes?”

Seriously, I wanted to try to understand this rather unusual devotion. Then I learned that the Infant of Prague actually started out with Saint Theresa of Avila. She had a devotion to the child Jesus. Bingo! A connection with my favorite Therese of Lisieux who also had a devotion to the child Jesus and spiritual childhood and spiritual innocence. I’m beginning to get it.

So after the tour I thought I’d kneel down and see if I could get hold of this a little bit more. As I’m kneeling I begin to understand the child dressed in royal robes and crown, for the whole image tells us that although he was a child born naked and squawking in a stable he was at the same time the royal prince of the house of David. He was a simple child, yet King of Kings and Lord of Lords. Furthermore, this is my destiny. I cannot enter the kingdom unless I become as a little child, but to enter the kingdom and be a royal adopted prince, a Son of God and a brother of Jesus is my ultimate destiny.

Then as I’m kneeling there I begin to see that this child is also the focus of our prayers for spiritual childhood and innocence for ourselves, but it should also be the one we turn to pleading for protection for our own children and for the innocence which is being lost every day to the corrupt morals of our day. Then thinking about innocence and children, lo and behold, I come home and check my emails only to find this horrible link: specially designed condoms for twelve year olds. Can you imagine? The world rightly bewails pedophilia and the sexualization of children, then turns around and offers pole dancing kits to little girls and condoms called ‘Hotshots’ for seventh graders.

So, may the Infant of Prague deliver us from such evils, protect our children and grant us the gift of spiritual childhood.

March 6, 2010 Secular Britain
Recent Comments
0 | Leave a Comment
"Catholicism has always defined the ideal but there are no limits on God's mercy and ..."
Guest Tony Palmer: Is There Salvation Outside ..."
"With all due respect, Shaun, are you relegating the actual Faith to whatever the local ..."
PGMGN Notes on Tony Palmer’s Funeral
"There are good parking valets and bad parking valets. There are good housesitters and bad ..."
Elliot Bougis The Case for Conversion to Catholicism
"did you vote for Bush Fr Longenecker? would you have?"
Petey Understanding Iraq
Browse Our Archives
get the latest from
Catholic
Sign up for our newsletter
POPULAR AT PATHEOS Catholic
1