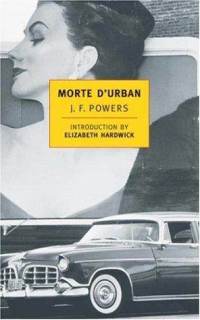 A friend lent me Morte D’Urban by J.F.Powers. Powers was unknown to me before, and it turns out he is a Catholic novelist of significant skill. Fr. Urban is the hero of the book–a priest of the second rate Clementine order, Fr. Urban travels the country leading retreats and enjoys a reputation as a charming man, a dynamic preacher and a priest who is ‘going places’. When he is assigned by his superior to a  retreat house in rural Minnesota run by the practical and parsimonious Fr Wilf he takes the demotion with good grace and gets on with the job. Before long he is networking in the diocese, schmoozing wealthy benefactors and ‘going places’ once more.

Beneath the amusing but spare storyline a soul is being made. Fr Urban–who lives up to his name by being very urbane–eventually sees his plans unravel. Somehow it all never really amounts to much and when his dream of being elected provincial comes true he doesn’t have the gumption to take the order into the heights he aimed for. In the process maybe he learns humility and a new trust in the strange ways of providence.

The book is somewhat uneven. The supporting characters intrude at times, and perhaps the cast and crew of the story are too varied, with minor characters neglected and other minor characters intruding. However, the whole thing works well enough and it is a story worth re reading. It’s unfortunate that Powers is not better known and that he did not complete more work. This one novel has more depth than at first sight–like Brideshead Re-Visited it is the story of God’s providence working its way out in the depths of one man’s life, and the result is surprising, inspiring and not a little bit disconcerting.

March 2, 2011 Highest Call
Recent Comments
0 | Leave a Comment
"Catholicism has always defined the ideal but there are no limits on God's mercy and ..."
Guest Tony Palmer: Is There Salvation Outside ..."
"With all due respect, Shaun, are you relegating the actual Faith to whatever the local ..."
PGMGN Notes on Tony Palmer’s Funeral
"There are good parking valets and bad parking valets. There are good housesitters and bad ..."
Elliot Bougis The Case for Conversion to Catholicism
"did you vote for Bush Fr Longenecker? would you have?"
Petey Understanding Iraq
Browse Our Archives
Related posts from Fr. Dwight Longenecker