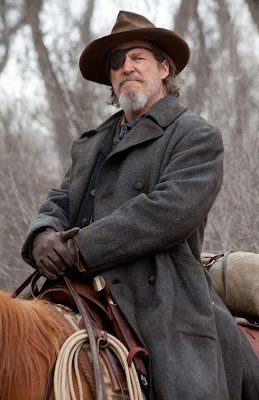 One of the weaknesses of our day is spoiled, sappy, soft, sweet, sentimentalist Catholicism.

I’m all for Jesus the friend of sinners, and gentle Jesus meek and mild, I’m all for love and forgiveness and not being judgmental, but I’m also for Rooster Cogburn Catholicism. Sometimes we also need backbone and some true grit.

When we’re inclined to drift along and believe in the soft and sentimental comfortable Jesus we need to be reminded of his ‘hard sayings.’ Mary Rose over at Prodigal Daughter has collected some of them. Here are two:

“Enter by the narrow gate; for the gate is wide and the way is easy, that leads to destruction, and those who enter by it are many. For the gate is narrow and the way is hard, that leads to life, and those who find it are few. “Beware of false prophets, who come to you in sheep’s clothing but inwardly are ravenous wolves. You will know them by their fruits. Are grapes gathered from thorns, or figs from thistles? So, every sound tree bears good fruit, but the bad tree bears evil fruit. A sound tree cannot bear evil fruit, nor can a bad tree bear good fruit. Every tree that does not bear good fruit is cut down and thrown into the fire. Thus you will know them by their fruits. – Matt. 7:13-20

Those are just two. Read the rest of the New Testament and you find St Peter and St Paul and even the gentle St John all speaking in violent terms about false teachers, heretics and sinners. For example, in Galatians St Paul is inveighing against those who would insist on everyone obeying the Jewish law and says, Circumcision! I wish they’d go the whole way and castrate themselves!” In his epistles, John repeatedly calls false teachers, “antichrists, liars, deceivers and children of the devil.”

But mark this: There will be terrible times in the last days. People will be lovers of themselves, lovers of money, boastful, proud, abusive, disobedient to their parents, ungrateful, unholy, without love, unforgiving, slanderous, without self-control, brutal, not lovers of the good, treacherous, rash, conceited, lovers of pleasure rather than lovers of God— having a form of godliness but denying its power. Have nothing to do with such people.


They are the kind who worm their way into homes and gain control over gullible women, who are loaded down with sins and are swayed by all kinds of evil desires, always learning but never able to come to a knowledge of the truth. Just as Jannes and Jambres opposed Moses, so also these teachers oppose the truth. They are men of depraved minds, who, as far as the faith is concerned, are rejected.

Or how about this humdinger from the second epistle of Peter…

But there were also false prophets among the people, just as there will be false teachers among you. They will secretly introduce destructive heresies, even denying the sovereign Lord who bought them—bringing swift destruction on themselves.

Many will follow their depraved conduct and will bring the way of truth into disrepute. In their greed these teachers will exploit you with fabricated stories. Their condemnation has long been hanging over them, and their destruction has not been sleeping.


For if God did not spare angels when they sinned, but sent them to hell, putting them in chains of darkness to be held for judgment…This is especially true of those who follow the corrupt desire of the flesh and despise authority.


Bold and arrogant, they are not afraid to heap abuse on celestial beings…But these people blaspheme in matters they do not understand. They are like unreasoning animals, creatures of instinct, born only to be caught and destroyed, and like animals they too will perish.


They will be paid back with harm for the harm they have done. Their idea of pleasure is to carouse in broad daylight. They are blots and blemishes, reveling in their pleasures while they feast with you. With eyes full of adultery, they never stop sinning; they seduce the unstable; they are experts in greed—an accursed brood!… These people are springs without water and mists driven by a storm. Blackest darkness is reserved for them. For they mouth empty, boastful words and, by appealing to the lustful desires of the flesh, they entice people who are just escaping from those who live in error. They promise them freedom, while they themselves are slaves of depravity—for “people are slaves to whatever has mastered them.”

If they have escaped the corruption of the world by knowing our Lord and Savior Jesus Christ and are again entangled in it and are overcome, they are worse off at the end than they were at the beginning. It would have been better for them not to have known the way of righteousness, than to have known it and then to turn their backs on the sacred command that was passed on to them. Of them the proverbs are true: “A dog returns to its vomit,” and, “A sow that is washed returns to her wallowing in the mud.”

Whew! Strong stuff. But then when you read the whole passages, you realize that as soon as the Apostles say this they turn around and say, “But I’m the greatest of sinners.” and “Love! you must love one another!”

We’re called to love and forgive and be tender hearted and gentle, but we’re also expected to defend the faith, call sin what it is and point out when people are in error because there are souls to be saved or lost.

Just remember though, you can only make a righteous judgment if you’ve first taken a long, hard look in the mirror, and remember St Paul’s words–also in Galatians–

“Brothers and sisters, if someone is caught in a sin, you who live by the Spirit should restore that person gently. But watch yourselves, or you also may be tempted. Carry each other’s burdens, and in this way you will fulfill the law of Christ. If anyone thinks they are something when they are not, they deceive themselves. Each one should test their own actions.”