The Day I Saw the Sun Spin 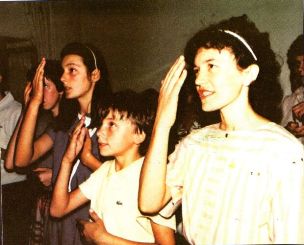 It was the early 1980s. I was living and working in England as an Anglican priest.  A group of parishioners got me to go with them and a group of Catholics to Medjugorje. (OK, spare me the whole Medjugorje hoax controversy, I’m not sure what to think about all that. I’m only telling you what happened.)

At six o’clock the whole town would stop to pray the rosary, and by six twenty the first two sets of mysteries would be completed. Then at 6:20 the visionaries would have their daily vision of the Blessed Virgin Mary.

So I’m sitting on the balcony of the guesthouse with my friend Eleanor praying the rosary. When we began the rosary at 6:00 I looked at the sun. It was a blaze of light in the sky above. The blaze of light was reflected on the hood of the car parked below the balcony where we were sitting.

I’m praying the rosary with my eyes closed and at 6:20 Eleanor gives me an elbow in the ribs. I look up and the sun is now a white disc in the sky, and it is spinning around like a Catherine wheel with sparks shooting off the edge. I can’t believe my eyes and look away. I look down to see the reflection of the sun in the hood of the car. The reflection is spinning like a Catherine wheel too.

I’m not making a statement about Medjugorje. I’ll leave that judgement up to the Pope.

I’m just saying what happened to me.

Did the sun really spin? Of course not. Something else happened, and I wasn’t the only one who saw it spin that day, but I can’t explain it.

By the way, the rosary I bought in Medjugorje was a pewter color when I bought it. I brought it home–unopened and unused, and when I got it home the metal had changed to a gold color. I can’t explain that either.

October 15, 2011 Paine in the Neck
Recent Comments
0 | Leave a Comment
"Catholicism has always defined the ideal but there are no limits on God's mercy and ..."
Guest Tony Palmer: Is There Salvation Outside ..."
"With all due respect, Shaun, are you relegating the actual Faith to whatever the local ..."
PGMGN Notes on Tony Palmer’s Funeral
"There are good parking valets and bad parking valets. There are good housesitters and bad ..."
Elliot Bougis The Case for Conversion to Catholicism
"did you vote for Bush Fr Longenecker? would you have?"
Petey Understanding Iraq
Browse Our Archives
get the latest from
Catholic
Sign up for our newsletter
POPULAR AT PATHEOS Catholic
1