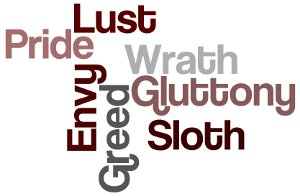 Take lust, for example. Oh, it seems so harmless–a little fun in the bedroom. A bit of slap and tickle, a bit of a giggle and gasp. Where would the violence be in lust? Look into the Marquis de Sade and see where unbridled lust takes you. Into the whipping chamber, the torture and rape and the sick scenes of sado masochism. Ordinary sex grows dull so the need for excitement and thrill and physical sensation demands. See what happens when the sex object is no longer wanted and the girl or the boy are abandoned, or worse–murdered so they won’t tell what happened and then thrown in a ditch,  and do not forget the most common violent result of lust: Abortion–the intentional killing of an innocent and vulnerable child.

Pride is only pride because one is better than another. Pride does not just make us want to win. It makes us want to beat the other guy. Pride puts us not just up, but over–over others who are inferior to us. There is no pride unless there is someone to show off to, and the only ones to show off to are those we deem our inferiors, and it only takes a small push for the pride to turn into violence. Just allow the person on top to have his superior position threatened and he will turn and snarl like a cornered animal–even if he does so with a sweet superior smile and a stab in the back–so that he can continue to think himself virtuous.

Envy leads to violence. Easy to see. When I am envious of another I will murder their reputation, tear them down so they cannot be greater than me, destroy them for being superior, and does it end in real, physical violence? Hell hath no fury like a woman–or man–scorned. Let someone get what was ours or what we think is ours and we may plot to destroy them.

Wrath is violence suppressed. Take off the lid and the wrathful will murder.

Greed is economic violence and a kind of theft. The greedy take from the poor and think nothing of it–furthermore they often think themselves clever for doing so (especially if they can connive to change the law and make their theft legal) It only takes a small step for the greedy to turn violent. Allow the greedy to think that their wealth and status is threatened and they will kill to defend it.

Is the glutton violent? What, a fat and jovial over eater violent? He is violent towards himself. His god is his stomach and should he be deprived of his addiction he will become first sullen, then violent, and do not forget that gluttony is the sin of all addictions. The fiercer addictions to drink and drugs spawn violence every day.

Even the slothful is violent, for he is violent against life itself. The slothful kills joy; kills creativity; sloth is a kind of despair which kills the fullness of life. Kills life. Kills.

October 21, 2011
Catholic Evangelism in the Bible Belt
Next Post

October 24, 2011 Liturgical Battle
Recent Comments
0 | Leave a Comment
"Catholicism has always defined the ideal but there are no limits on God's mercy and ..."
Guest Tony Palmer: Is There Salvation Outside ..."
"With all due respect, Shaun, are you relegating the actual Faith to whatever the local ..."
PGMGN Notes on Tony Palmer’s Funeral
"There are good parking valets and bad parking valets. There are good housesitters and bad ..."
Elliot Bougis The Case for Conversion to Catholicism
"did you vote for Bush Fr Longenecker? would you have?"
Petey Understanding Iraq
Browse Our Archives
get the latest from
Catholic
Sign up for our newsletter
POPULAR AT PATHEOS Catholic
1