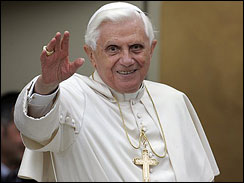 Living in the Bible Belt has its moments. There’s a gritty reality to the religion in the South, and fairly often you feel like  you really are living in a Flannery O’Connor story.

One of the crunchy parts of living here are the “separated brethren” who seriously ask, “Are Catholics Christian?” It’s a difficult question to answer, not because there is no answer, but because the answer is on the one hand so obvious, yet if the question is being asked you realize that the answer is not obvious at all. In fact, you realize that the person asking the question is only doing so because he already truly believes that Catholics are not Christian.

The way forward is to define what we mean by “Christian”. Catholics define “Christian” as any person who is baptized and who has faith in Jesus Christ. Insofar as this goes, most Christians from every denomination would agree. This definition of “Christian” is a baseline. It’s the foundation.

Very often this means that the person in question has had a particular type of religious experience. They have gone forward at a revival meeting or prayed the sinner’s prayer or wept for their sins and turned to Jesus. It doesn’t take long to see that if this is the criteria for being a “Christian” then (allowing for a few slight differences in language) that most Catholics have done precisely this. If the sinner’s prayer is a way of rejecting the world, the flesh and the devil and believing in Christ as Savior and Lord, then this is precisely what happens within the Catholic baptism rite. Repenting of one’s sins and accepting the forgiveness of Christ is precisely what happens when a Catholic goes to confession. Repenting of sins and accepting Christ is precisely what happens at Mass.

The Evangelical is not comfortable with this because it all happens with “somebody just reading prayers out of a book.” But why should the Catholic liturgy with set prayers and set music and hymns be any worse than the “liturgy” of the Evangelical preacher who follows a set formula for preaching, for giving the altar call and using the same emotional music (Just As I Am Without One Plea) Are not both liturgical set pieces? I think they are.

So, are Catholics Christian? Of course. They’ve repented of their sins. They’ve accepted the forgiveness of Christ. They’ve rejected the world, the flesh and the devil. They’ decided to follow Christ within the faith of the Church.

This comparison between Evangelical and Catholic Christianity is something I have written on extensively in my book More Christianity. In it I compare the Evangelical way of looking at some aspect of Christian tradition and show how Catholicism does not contradict the Evangelical’s faith, but fulfills and complete it.

The question therefore is not, “Are Catholics Christian” or “Are Evangelical Protestants Christian” but How much of the Christian faith do you embrace? Evangelicals tend to follow a reduced, minimalist version of the faith.

Catholics wish to have it all.

Think a cheese cracker and water or a five course Italian banquet.

I know which I’d prefer.

March 25, 2012 Atheism: The Opiate of the People
Recent Comments
0 | Leave a Comment
Browse Our Archives
get the latest from
Catholic
Sign up for our newsletter
POPULAR AT PATHEOS Catholic
1