Why Women Can Be Protestant Ministers 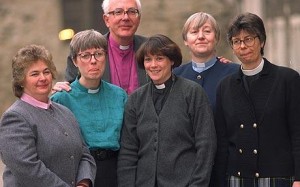 My post on why women cannot be priests has received plenty of interesting comments, but most of those who objected to my post were not Catholics.

I think what they heard me say is that women should not be ordained at all. This is not my point. I’m quite happy for an Anglican Bishop to ordain women. If a Methodist Bishop ordains women ministers in his or her church I’m good. I really don’t mind at all if a Mennonite Bishop or a Bishop in the African Methodist Episcopal Church or the Lutheran Church ordain women ministers. If the Praise Cathedral Holiness and Happiness Church ordains women–you go for it! It’s fine by me if a Mormon Bishop chooses to ordain women or if the Bishop of the Church of the Foursquare Gospel of the 1928 Revision ordains women ministers. May the women ministers of the Apostolic Tabernacle of Light enjoy a full and fruitful ministry. It the Temple Television Worldwide Church of God wants to have a lady preacher, let her proclaim the word of the Lord!  If a Bishop of the Anglican Orthodox Episcopal Church of North America wants to ordain women, let them live long and prosper.

A Protestant minister is not a Catholic priest. My post really had nothing at all to say about Protestant Churches choosing to ordain women as ministers. They can do as they like.

Furthermore, I’m quite happy to accept that there are good sentimental, utilitarian and even Biblical or theological arguments for women to be ordained to the Protestant ministry.  So let us examine what the Protestant ministry actually is. The majority of Protestants are ordained to a ministry of the Word and a pastoral ministry, and why shouldn’t a woman exercise these ministries if their governing bodies decide so? Let them go for it. Good for them, and I’m sure plenty of sincere, and prayerful women do a good job in such ministries.

Then there are the more liturgical “high church” Protestants like some Methodists, Lutherans and Episcopalians. They too have women clergy, but do any of them profess to be Catholic priests? I don’t think so. Even if they speak of “sacraments” and “the Eucharist” and “the real presence” they don’t really believe in a sacrificing priesthood and transubstantiation. Quite rightly, they’re not Catholic priests and don’t claim to be. So let the women be ordained in their denominations if that is what they wish.

My post was simply stating the Catholic position, and that is that women can’t be Catholic priests. If other religious groups want to ordain women we Catholics don’t really have anything to say about it at all except, “That presents a serious obstacle to unity between us and your church. ” Other than that (which is just us being honest) why the fuss?

This is one of the things I find most curious about dialogue with non Catholic Christians. So often they say to us Catholics, “We’re just the same you know. No difference between us.” Then when I say, “If there’s no difference between us, why not just become a Catholic?” they get all huffy and say, “But I could never worship Mary and kiss the Pope’s toe and believe that the bread and wine is really the Body and Blood of Jesus!!”

“Right then.” I reply, “So you really do think there is a big difference between us. So don’t pretend there isn’t.”

Same with ordination. Ordain women if you like. We don’t mind. But don’t be offended when we point out that (in case there is any doubt in your mind) it is not a valid Catholic ordination. Why does this upset non Catholics? They knew it wasn’t a Catholic ordination to start with. What it actually is, and what those ordinations consist of and what they mean we don’t presume to say. It’s up to the non-Catholics to say what they mean. All we are saying is that they’re not Catholic.

So be at peace my dear non Catholic brothers and sisters. Go ahead and ordain whoever you like and may these ministers have a fruitful and wonderful ministry. May they prosper and do the Lord’s work.