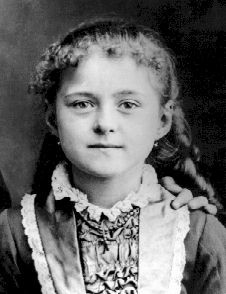 G.K.Chesterton observes that every age is saved by a saint most contrary to the spirit of the age. This clash–this ability by Divine Providence to provide a saint that stands everything on it’s head is exemplified by a comparison between Frederick Nietzsche and Therese of Lisieux. They were contemporaries. Nietzsche was born in 1844 and died in 1900. Therese was born in 1873 and died just three years before Nietzche in 1897.

Nietzsche stands as the terminal point of godless- humanistic “enlightenment” philosophy. His thought is the end of the line, and his own sad decline into madness and a sad lonely death somehow summarizes and symbolizes his life and thought. Nietzsche is famous for saying “God is dead.” but his thought is more profound and disturbing than that little quote. His rejection of Christianity was linked with his idea of  the “superman”. He regarded Christianity as a religion that exalted weakness and thought pity for the weak only encouraged more weakness. Dull Christian morality was, in his view, the enemy of the true vitality of man. The “superman” would realize that there is no objective truth and no objective morality–that God and goodness was all man made. As such he would rise above the mediocre and discover his own values, and these discovered values would emerge from his own essential will to power.

Everybody comes from somewhere, and Nietzsche was the son of a small town Lutheran pastor and teacher. He went to conventional middle class Christian boarding schools. He was the product of German, small town Protestantism, and it was this background that he rejected. What kind of a God, therefore, did Nietzsche consider to have died? It was the god he learned about within small town bourgeois Protestantism–a God who expected dull conformity of belief and behavior–a God who didn’t like smart boys asking too many questions. If this was the God that the boy Nietzsche was introduced to in his childhood, then not only was that God dead. He was never alive.

Therese, on the other hand, is not the child of small town Protestantism, but the child of small town, bourgeois French Catholicism. Her life and her philosophy are almost the exact opposite of Nietzsche. She never rejected the religion she was given as a child, and yet she questioned the same expectations of dull conformity and challenged them not by rejecting her religion, but by living it out in a radical way that turned the dull piety of the French bourgeois Catholics (and then the world) upside down.

If Frederich Nietzsche met Therese Martin how would the conversation go? He might explain the death of God and the inexorable rise of nihilism. Therese would say ‘the good God’ was not dead, but only man’s false ideas of God had died. When he explained how morality was discovered by each person Therese would reply that each person did indeed have to discover morality–but discover the reality of the received morality in a radically personal way. When Nietzsche explained how the great ones had to give up fitting into dull society, had to give up attachment to all material things, Therese would agree and point out that this is precisely what she aimed to do by becoming a Carmelite. When Nietzsche explained that this process of negation and discovery of true values was the process by which  the “superman” came to be, Therese would agree, but she would call that “superman” a “saint”. When she cries, “Sanctity! It must be won at the point of a sword!” or “You cannot be half a saint. You must be a whole saint or no saint at all.” She gives the world her own version of the “superman”–one who has overcome the dull conventional beliefs and behaviors and risen to another dimension of humanity altogether. Nietzsche’s use of poetry and paradox would not have been lost on Therese either–and this is where she trumps Nietzsche–she would say that the way to become that saintly “superman” is precisely by being what Nietzsche despised: a little girl. The way to become the “Overman” was to become the “Underdog”. The way to become a great human was to become a trusting child of the loving Father–a slave to others and a slave to Love–and one who follows the  “little Way” that is a great way, and a simple way that is the hardest of all.

This is one of God’s great jokes: that the world throws out a Nietzsche–a proud, self dramatizing Byronic philosopher– the atheist of the grand flourish and the tragic gesture, and God answers with a little girl who likes to sit on Papa’s lap and see her initials in the stars. See how it all ends: Nietzsche descends into madness and dies penniless in his domineering sister’s house. His legacy was one of  nihilism and despair, and his greatest ignominy is that his thought inspires the Nazis who plunge Europe into war and murder millions. Therese, on the other hand, also dies an obscure and tragic death–suffering from tuberculosis and dying after long, drawn out agony. But within months of her death her little book is re-printed by the tens of thousands,  She is hailed as the ‘greatest modern saint’ by Pope Pius XI and as a final hilarious, standing on my head act–a hundred years after her death this little girl who died at the age of just 24 is named as a Doctor of the Church by Blessed John Paul II. Her star continues to rise and wherever her relics are taken on pilgrimage incredible crowds to venerate the memory of this little girl who answers the monstrous spirit of our age.

The two stand together back to back as a genius and a madman. Both speaking of the same mysteries, but one from a perspective of madness and one from the perspective of a rock solid realistic sanity. At the heart of it all, Nietzsche knows that without God there is nothing. Therese, on the other hands, sees that with God there is everything. Nietzsche says, “I will have nothing.” Therese says, “I will have everything.” The clash between Nietzsche and Therese is the great clash of our age, and the clash of every age. Will you live without God, facing the darkness of nihilism with bravado and nothing but the will to power? Will you follow that way which leads into darkness, despair and ultimate loneliness and death or will you follow the little way that leads through the ordinary into humility,  the way down that leads up, the way of negation that leads to life, and the way through the darkness into the light?

UPDATE: from the combox: ”

October 3, 2012 Sanitizing Sin
Recent Comments
0 | Leave a Comment
"Catholicism has always defined the ideal but there are no limits on God's mercy and ..."
Guest Tony Palmer: Is There Salvation Outside ..."
"With all due respect, Shaun, are you relegating the actual Faith to whatever the local ..."
PGMGN Notes on Tony Palmer’s Funeral
"There are good parking valets and bad parking valets. There are good housesitters and bad ..."
Elliot Bougis The Case for Conversion to Catholicism
"did you vote for Bush Fr Longenecker? would you have?"
Petey Understanding Iraq
Browse Our Archives
get the latest from
Catholic
Sign up for our newsletter
POPULAR AT PATHEOS Catholic
1