The Quotable Newman on Anglicanism 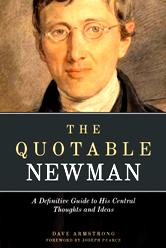 I never in arguing should think of entering upon your question whether or not the Anglican Church was ‘in schism’ or whether or not it was in possession of an ‘Apostolical Succession’. These questions seem to me beside the point in dispute. I never indeed, as I think, have said, that its orders were certainly invalid; what I have said, if I have spoken against them is that their validity was doubtful, and that doubtful orders were unsafe . . . But my direct and patent reason against the Catholicity of the Anglican communion is quite clear of the question of orders. Anglicans consider the Church to be only a family; but it is more than that, it is a state, a polity, a kingdom, a visible kingdom. . . . Our Lord announced that the kingdom of heaven was come, St Paul speaks of the one body with many members, (not branches, a body has not branches.) If then the Church is a kingdom, and the one predicted Kingdom, the communion of Rome and the Anglican communion cannot both be that Kingdom, any more than King James and King William could each at the same time be King of England. (LD xxx, 407; Letter to an Unknown Correspondent, 7 October 1884)

from The Quotable Newman by Dave Armstrong. Go here for more info.

November 20, 2012 Understanding the Crisis in the Church of England
Recent Comments
0 | Leave a Comment
Browse Our Archives
get the latest from
Catholic
Sign up for our newsletter
POPULAR AT PATHEOS Catholic
1