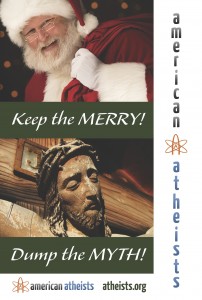 I thought atheists were supposed to be  smart. Guess not. Here’s an ad American Atheists have paid $25,000.00 to put up in Times Square.

What’s hilarious about this ill-thought out campaign is that the atheists keep telling us they are only interested in evidence. They only want the facts ma’am. They’re thinkers. They’re rational. blah blah blah.

They’re opposed to “myths”. They don’t like make believe. They think it’s a form of child abuse to tell children stories about big sugar daddies in the sky who will give them everything they want. Religion is, they say, an infantile belief system to bring comfort to the frightened, weak minded babies. The atheists tell us they’re down on fairy tales. They don’t believe in magic sky fairies.

But they want to keep a magic elf who lives at the North Pole and flies through the sky with dancing reindeer? They want to keep the fat fairy man who comes down the chimney of every home in the world in one night while drinking Coca Cola? They want to keep jolly old St Nick who lays a finger beside his nose ’cause ’twas the night before Christmas? They don’t want a God who judges, but they want the old man in the red suit who keeps a list of who’s naughty and nice and checks it twice? They don’t like a God who makes his little children feel good, but they want the happy elf who has his bag full of goodies for all the good boys and girls? Do these atheists tell their children there is such a person as Santa Claus? Do they abuse their little ones with such obvious lies?

In the meantime they dub the crucified Jesus Christ a “myth”? In fact, of the two images, Jesus Christ crucified is just about as far from a myth as you could get. It’s about as mythical as a photograph of an Auschwitz corpse or one of those black and white photos of a lynched negro hanging from a tree. The crucifixion of Jesus Christ is a bare, hard historical fact. The Romans crucified people. It wasn’t pretty. It happened to Jesus of Nazareth. No myth there.

The crazy and stupid thing about this campaign is that it is, well, so crazy and stupid. If they wanted to make their point they could have tried to picture the things about Christianity and Christmas that do seem more mythical and difficult to believe–like the shepherds and angels and wise men with a star or some such. They could also have chosen something more positive and humanistic about Christmas–something pleasantly pagan and mildly materialistic like two people kissing under mistletoe or people on a sleigh ride or some such nonsense.

Then again, maybe the ad is just what it should be and we should rejoice because anyone with half a brain who sees it and thinks things through will realize how vapid the atheists are who thought it up in the first place.

December 18, 2012 Who Wrote Mark?
Recent Comments
0 | Leave a Comment
"Catholicism has always defined the ideal but there are no limits on God's mercy and ..."
Guest Tony Palmer: Is There Salvation Outside ..."
"With all due respect, Shaun, are you relegating the actual Faith to whatever the local ..."
PGMGN Notes on Tony Palmer’s Funeral
"There are good parking valets and bad parking valets. There are good housesitters and bad ..."
Elliot Bougis The Case for Conversion to Catholicism
"did you vote for Bush Fr Longenecker? would you have?"
Petey Understanding Iraq
Browse Our Archives
get the latest from
Catholic
Sign up for our newsletter
POPULAR AT PATHEOS Catholic
1