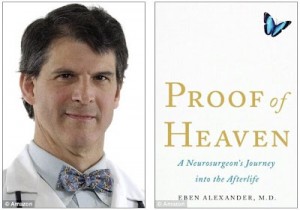 I have just finished the fascinating Proof of Heaven by Dr Eben Alexander. This is the story of the NDE (Near Death Experience) of a brain surgeon. When he came back from the other side he explains (as do most who have an NDE)  how much more real the other world is than this one. He doesn’t talk much about religion, but he explains how, after his experience, when he went back to church–with it’s music, stained glass and sense of the sacred, he suddenly ‘got it’. He sees what religion is really for. It is meant to give you a glimpse of heaven. Of course more traditionally minded Catholics have been saying this all along–that sacred architecture and liturgy and sacred music is meant to connect us with the other side–give us a glimpse of heaven and take us out of this world.

Suddenly I understood the reason for the strictures of the monastic life. The monk takes vows of stability, obedience and conversion of life. He lives a life of routine, obedience, poverty and structure. He lives this strict life so that the cares and concerns and pre occupations of dealing with the material world are taken care of. This is so his mind is care free and therefore able to ascend to the spiritual realities and grow into the higher levels of consciousness through prayer, worship and physical self denial. The monk denies himself the physical pleasures and material concerns not because they are bad, but because there is something  better.

Alexander also reveals the reason for religion. Religion is not there just to make the world a better place, help the poor, feed the hungry and help people lose weight. It’s there to open the human heart to the reality of the divine. That is why the liturgy is the primary work and necessity of those who are religious. Celebrating Mass, therefore, and saying our prayers in a routine manner is at the very heart of religion. It is what religion is about. The good deeds etc…that’s just the result of the religion, not the point of the religion.

The rules of religion (and the word “religion” comes from the word “rule”) are the means to an end. The moral regulations, the doctrinal statements, the instructions for prayer, the rules for devotions–all those things are the rules of the game. They are the map for the journey. They are the guidebook. They help us get into shape so that we can eventually, through a lifetime of prayer, discipline, penance and belief come to the point of transcending this world and living in a state of higher consciousness–what we call “living by faith.”

Finally, Dr. Alexander comes back from his NDE saying that he is totally convinced that there is a higher connectedness and purpose in the universe. Nothing is wasted. All things work together and the love and light far, far exceeds the darkness and evil. He believes there is a higher purpose and connectedness and our job is to perceive that, learn how to discern it and live within that higher purpose and connectedness. In other words to say, “Thy will be done on earth as it is in heaven.”

January 20, 2013 The Constant Conversion of St Paul
Recent Comments
0 | Leave a Comment
"Catholicism has always defined the ideal but there are no limits on God's mercy and ..."
Guest Tony Palmer: Is There Salvation Outside ..."
"With all due respect, Shaun, are you relegating the actual Faith to whatever the local ..."
PGMGN Notes on Tony Palmer’s Funeral
"There are good parking valets and bad parking valets. There are good housesitters and bad ..."
Elliot Bougis The Case for Conversion to Catholicism
"did you vote for Bush Fr Longenecker? would you have?"
Petey Understanding Iraq
Browse Our Archives
get the latest from
Catholic
Sign up for our newsletter
POPULAR AT PATHEOS Catholic
1