Why Bother With Church? 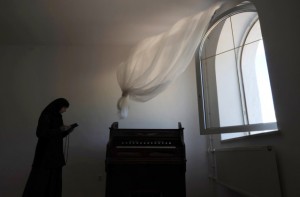 When I was a high school chaplain I had a conversation with some nice parents who attended a Protestant church of some sort. They were distressed because their tenth grade son had announced that he no longer wanted to go to church. When they asked him why he said, “I love Jesus in my heart. Why do I need to go to church?”

I asked the parents what their reply was and they rather stammered and stuttered that they didn’t really have an answer. The kid had stumped them.

I like kids like that. See, they were into this “Jesus is a really nice guy” kind of Christianity and for them it was the whole suburban, respectable Christian schtick and their son put a bomb under the whole thing. Stood things on their head if you like.

You see if Jesus is just your Uncle Don then church just becomes an hour a week when you tootle along to hear some nice person tell you some nice things about what Uncle Don thought and taught and maybe you’ll pick up a few pointers on how you can be more like Uncle Don too one day. Then you sing a nice song about gathering all together and feel warm about life for a few minutes, then out the door and back to the real world.

I’m with the tenth grader. Why bother?

Here was my answer to the nice American suburban couple, “Well, we Catholics have a good reason to go to church. See, Jesus Christ is the Second Person of the Holy Trinity. He’s God in human form and he’s at church waiting for us. We’re supposed to be in him and him in us and that means we have to receive him sacramentally at communion and you can’t really do that on your own.”

I also like that. I wish my Catholicism horrified more smug Christians.

January 26, 2013 Healing the Father Wound
Recent Comments
0 | Leave a Comment
"Catholicism has always defined the ideal but there are no limits on God's mercy and ..."
Guest Tony Palmer: Is There Salvation Outside ..."
"With all due respect, Shaun, are you relegating the actual Faith to whatever the local ..."
PGMGN Notes on Tony Palmer’s Funeral
"There are good parking valets and bad parking valets. There are good housesitters and bad ..."
Elliot Bougis The Case for Conversion to Catholicism
"did you vote for Bush Fr Longenecker? would you have?"
Petey Understanding Iraq
Browse Our Archives
Related posts from Fr. Dwight Longenecker