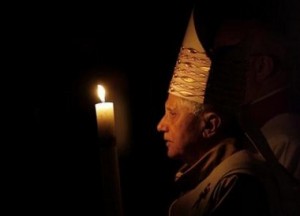 The Catholic Church has a tradition of selecting elderly “caretaker popes” who end up being “history making popes.” When Pope John XXIII suddenly called the Second Vatican Council the church was turned upside down.

When Benedict XVI created the Anglican Ordinariate he made history. Never before had a new structure been established to allow Protestants to have their own “church within the Church”. Benedict used the new media as no other Pope had done, churned out brilliant Biblical studies making clear that he was writing as a theologian and not the successor of Peter. Building on the legacy of Bl. John Paul, he embraced the reforms of the Second Vatican Council at the same time showing us how tradition can continue without turning back the clock. All of these, in one way or another, are great surprises.

Now he surprises us again. Not for six hundred years has a pope stepped aside. He has done so quickly and unexpectedly. While his decision cannot have been sudden. The sudden effectiveness–he will be gone within a few weeks–is brilliant. There is scarcely time for the world’s cardinals to book their plane tickets–much less to be politicking and planning how to get the white soutane. The press has not had the chance to be picking papabile for months. The Vatican insiders have not had time to get “their man” in place.

It is all going to be very exciting to watch. The questions are bubbling up in everyone’s mind. No doubt the conspiracy theorists will suspect skullduggery at the Vatican. Was he pressured to go? Is there a scandal lurking that he cannot cope with? Is there a secret we don’t know that is about to destroy the Catholic faith? Did he make a terrible mistake and feel the only thing to do was resign? They will be pointless.

Other more ordinary questions arise: Will there be a retirement ceremony of some kind? How will he go? Will he simply step into a helicopter and be whisked away? Where will he live? What title will he have? What will he do?  I predict he will retire to a quiet monastery and complete obscurity. Whatever happens he goes with the affection, prayers and gratitude of his whole flock, for stepping into a role he did not wish for and for serving so brilliantly as a humble laborer in the Lord’s vineyard.

For my article “Good Bye to Benedict” for Aleteia go here.

February 11, 2013 Duane Mandible on Pope's Resignation
Recent Comments
0 | Leave a Comment
"Catholicism has always defined the ideal but there are no limits on God's mercy and ..."
Guest Tony Palmer: Is There Salvation Outside ..."
"With all due respect, Shaun, are you relegating the actual Faith to whatever the local ..."
PGMGN Notes on Tony Palmer’s Funeral
"There are good parking valets and bad parking valets. There are good housesitters and bad ..."
Elliot Bougis The Case for Conversion to Catholicism
"did you vote for Bush Fr Longenecker? would you have?"
Petey Understanding Iraq
Browse Our Archives
get the latest from
Catholic
Sign up for our newsletter
POPULAR AT PATHEOS Catholic
1

Facing this Election, We Must Recall...
suspended in her jar
Related posts from Fr. Dwight Longenecker

Trump Refuses to Commit to Peaceful Transfer of...
President Trump’s long time consigliere, Michael Cohen has said that Trump will...

God Is My Co-Parent: The "Everyday Religion" of...
Recently finished Susan Crawford Sullivan's 2011 Living Faith: Everyday Religion and Mothers...
view all Catholic blogs
What Are Your Thoughts?leave a comment
Copyright 2008-2020, Patheos. All rights reserved.