The Vicar on the New Archbishop

A half pint of lager shandy? Thank you Ian, I don’t mind if I do. Very nice. Would you mind awfully asking for a packet of those scampi fries? They’re a tasty snack aren’t they? Get two. We’ll share them ’round.

The auditions for the parish party went well. Yes, I must admit it, I’ll be doing my Mr. Bean act once again. It seems to be a favourite doesn’t it?

Well, it look like we’re about to have a new Archbishop of Canterbury. That Welsh fellow is off to Cambridge. I always thought he needed a good barber don’t you? Bit scruffy. He was Welsh, and perhaps what they expect of their Druids–never did understand all that I must admit. What do I think of him? Nice enough chap I suppose. Can’t help feeling sorry for him. I always felt his main problem is that he was forever trying to explain himself. Better not to do that I think. My old schoolmaster–the one who wound up in the soup–used to say, “Don’t explain and don’t complain!”.  There’s something to that.

This new one seems to be champing at the bit rather. I expect he wants to get things done and has lots of bright ideas, and  I wish him well. Everybody says what a difficult job being Archbishop of Canterbury must be, but I’ve never seen it myself. All a chap’s got to do in a situation like that is keep his mouth shut, smile quite a lot, agree with everybody, have a few jokes handy and then not do very much. I’ve always found it’s when you try to start something up or solve a problem that the real difficulties start. No matter what you do someone’s bound to get rather sniffy. Better to let sleeping dogs lie don’t you think?

Take this matter of these fellows who want to marry one another. First I heard of it was when the Dean of Girdle mentioned it at my interview to come here. I can’t say I agree with it, but Lavinia seems keen. Says she and her partner Georgie Samsonite have already had some sort of wedding. So off they go, trying to change the world. It’s bound to end in tears. She likes to bring the subject up quite a bit at the clergy meetings. Best thing to do in a situation like that is to keep smiling and not say much of anything. Someone like Lavinia’s a rather determined sort. Best to sit back and let them get on with it. I mean to say, it’s not really my cup of tea, but I can’t see it does any harm.

That would be my advice to the new Archbishop. It’s served me well all these years. Why I remember when I was at St Dunstan’s and let things chortle along everything was fine. It was when I tried to do anything that it all went pear shaped. It’s when I had a bit of a flutter with some church funds on the stock market that I got my fingers burned. Then there was the time I had the bright idea of bringing in some of that modern music for the young. Next thing I knew they had a rock and roll band in the church and some sort of flashing lights and so forth. It was all a great mistake and lucky for me Daphne came in at the last minute and pulled the plug. All the lights went out and I had to light a few candles and sing “The Day Thou Gavest Lord Has Ended”, apologize and send them all home.

The problem with all these bright young things in the Church of England is that they all want to go around changing everything. Lavinia with her wimmin’s peace group and the Order of Adamites…and that young curate over at St Cuthbert’s chaining himself to the churchyard fence to protest the stockbrokers. All it really does is upset everyone. Poor old Major Wildebeest is worked up about it all the time.

All this keeping up with the times and being relevant. I can’t see it myself. I’ve learned my lesson. Keep things the same.  As the Yanks say, “If it ain’t broke don’t fix it.” We were all going along quite happily with things as they had been for as long as I can remember, Hymns Ancient and Modern, Morning Prayer and Holy Eucharist at 8, the monthly family service, tea in the Vicarage at 4 and evensong at 6, the garden party and the Christmas bazaar…

Nevermind. Let’s look on the bright side! So here’s to the new Archbishop lads, let’s hope  he’ll simply keep the show on the road and avoid all the silly new fangled stuff. If only we can just keep to the old ways. Changing things about for change’s sake doesn’t seem right somehow. Daphne was quoting one of her favorites just the other day saying “The Church that marries the spirit of the age will soon be a widow.” Something to that I think. Problem is, I’m not sure where to find a church like that. If it isn’t the dear old C of E who is it?

Well, I’d better toddle off home lads. Mefistofele will want letting out and she who must be obeyed will be waiting for me no doubt with some bon mot from Cardinal Newman or some such. 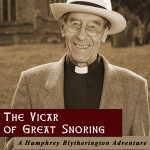 Have you read The Vicar of Great Snoring? Go here (or check out the right sidebar) to purchase the first full length short story featuring Humph and his pals. Read the adventure of how he and Daphne ended up in Great Snoring. It’s available as an e-book for Kindle or as a download. Price: $2.99

Alternatively, go here to download the pdf file.Price $1.99. You can also read the archived posts by the Vicar by using the ‘categories’ facility located in the right sidebar of the blog.

February 8, 2013 Plutocrats and Democrats
Recent Comments
0 | Leave a Comment
"Catholicism has always defined the ideal but there are no limits on God's mercy and ..."
Guest Tony Palmer: Is There Salvation Outside ..."
"With all due respect, Shaun, are you relegating the actual Faith to whatever the local ..."
PGMGN Notes on Tony Palmer’s Funeral
"There are good parking valets and bad parking valets. There are good housesitters and bad ..."
Elliot Bougis The Case for Conversion to Catholicism
"did you vote for Bush Fr Longenecker? would you have?"
Petey Understanding Iraq
Browse Our Archives
Follow Us! 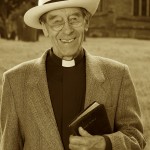