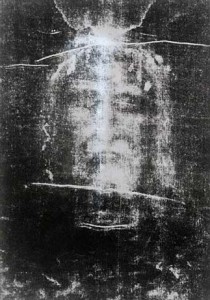 The latest scientific tests show that the Shroud of Turin dates to the first century. Go here to read more. Still, Shroud skeptics say it’s a medieval forgery. So here are some questions for them:

1. If it’s a fake why hasn’t anyone–even with modern technology–been able to reproduce it?

2. How did the forger not only know about photography in the Middle Ages, but manage to produce what is, in effect, a photographic negative?

3. The image is not painted, but “singed” or burnt on to the fabric. How did they do that?

4. The “burned” image doesn’t penetrate more than the surface level of the cloth. Paint would soak in wouldn’t it?

5. When paintings are put into a 3-D replicator they don’t produce successful 3-D images. This does. How did the forger do that?

6.  They found pollen and traces of soil from the area of Jerusalem. Did a medieval forger in Europe think of that and travel out there to get samples?

7. Are carbon 14 dating tests ever wrong? We’re assuming someone in the Middle Ages was a fraud. What if the modern scientists cheated? Its possible isn’t it?

9. The forger even got the details of the wounds correct because the flagellation wounds correspond not only to Roman flagella, but to the direction from which the two men would have whipped the victim according to Roman torture techniques. How did the forger know that?

10. The pigtail at the back? It links up with the hair style of Jewish men who had taken the “Nazarite vow” in the time of Christ. This was some fantastic forger no?

March 30, 2013
The Power of Simplicity and Authenticity
Next Post

April 9, 2013 Anger, Hatred and Irrational Rage
Recent Comments
0 | Leave a Comment
"Catholicism has always defined the ideal but there are no limits on God's mercy and ..."
Guest Tony Palmer: Is There Salvation Outside ..."
"With all due respect, Shaun, are you relegating the actual Faith to whatever the local ..."
PGMGN Notes on Tony Palmer’s Funeral
"There are good parking valets and bad parking valets. There are good housesitters and bad ..."
Elliot Bougis The Case for Conversion to Catholicism
"did you vote for Bush Fr Longenecker? would you have?"
Petey Understanding Iraq
Browse Our Archives
Related posts from Fr. Dwight Longenecker