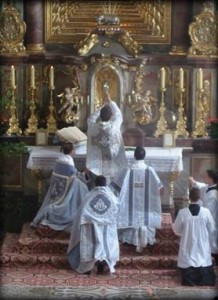 One of the universal practices of humanity around the world in ancient times is the ritual of sacrifice. The reasons and methods of sacrifice are complex and varied, but what remains is that in virtually every religion in every part of the world in one way or another a sacrifice was offered.

Sometimes the sacrifice was linked with the scapegoat idea–the terrors and trials and problems and fears of the people were projected onto the sacrificial victim, and as it was killed the problems and sins were done away with. The sacrifice was sometimes simply a ritualistic way to get rid of the tribe’s enemy. In battle the enemy was captured and then ritually sacrificed. Another element of the sacrificial system was an attempt to placate the gods so they would provide the necessary weather conditions for a good crop. Sacrifices were also offered as a way of giving the gods a gift of something precious. There were also identifications with the mysteries of life and death, the underworld, redemption, release and the idea of an exchange of victims to effect justice and peace.

As I celebrated Mass today what hit me was how amazingly unusual it is that the one religion in the modern world today that still offers a sacrifice is the Catholic faith. I believe Hindus still offer sacrifices at a low level of making offerings, but the Catholic Church is the only religion that still maintains a full sacrificial system through the mystery of the Mass.

Why is this? Why have sacrifices pretty much died out everywhere, yet it remains within Catholicism? Because the cross of Christ is the “one, full, final sacrifice”. On the cross the sacrificial systems of the world were fulfilled. All was completed. The Mass is the daily remembrance of that one, full, final sacrifice. Through the mystery of the Mass we bring that completed sacrifice into the present moment and apply it’s graces to our needs today.

This is why the concept of the ‘sacrifice of the Mass’ must not be minimized or lost. The Mass is not primarily the “family fellowship meal”. It is not primarily the “gathering”. It is not just a time to sing hymns, hold hands and hear a homily about how to be nice people and make the world a better place. Instead it is a solemn ritual. It is the one full final sacrifice alive again and again and day after day–presented to God in an unbloody manner.

Once we realize the depth of this mysterious exchange our appreciation for the Mass and our appropriation of its benefits will increase.