Joseph Susanka reminds us here not to be too hasty with the new pope. I am duly chastised. One of the problems with the new media is the speed in which things are published and the speed at which responses are expected.

A few weeks ago, it was known simply as  “The Interview.” Say those words, and everyone knew exactly what you were talking about.

And we on the Catholic InteWebs were falling all over ourselves (and everyone around us) in a desperate, raptor-like attempt to have opinions on the Pope’s words  – opinions that seemed to be based as much on pull-quotes (or even headlines) as onthe text of the actual interview. And opinions that often told us as much about the person holding them than they did about the Pope himself.

Everyone seemed to be searching for ways in which his words bolstered their pre-existing positions. Or their pre-conceptions about his orthodoxy or heterodoxy, media savvy or naiveté, humility or false humility. Everywhere I looked, people were seizing upon his words, and swallowing them whole. Without actually chewing. Without actually listening.

For my part, I’m going to take Joseph’s advice and hold off on quick comments. I am also going to go back and read the most recent papal encyclicals so that I read Francis through the spectacles of the church rather than through my own prejudices and perspectives. 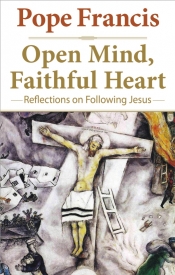 I am also going to read a new book that providence has added to my “books to review” pile Pope Francis-Open Mind Faithful Heart. This is a collection of the Pope’s thoughts, homilies and teachings as Jorge Bergoglio. I’m also going to read more about his life and ministry so I can try to get into his skin, his mind, his heart and his shoes–even if they are brown.

October 3, 2013 Norman Anderson on Church Donuts
Recent Comments
0 | Leave a Comment
"Catholicism has always defined the ideal but there are no limits on God's mercy and ..."
Guest Tony Palmer: Is There Salvation Outside ..."
"With all due respect, Shaun, are you relegating the actual Faith to whatever the local ..."
PGMGN Notes on Tony Palmer’s Funeral
"There are good parking valets and bad parking valets. There are good housesitters and bad ..."
Elliot Bougis The Case for Conversion to Catholicism
"did you vote for Bush Fr Longenecker? would you have?"
Petey Understanding Iraq
Browse Our Archives
Follow Us!

George Will and the Millstone of...
Catholic and Enjoying It!
Related posts from Fr. Dwight Longenecker