The Pope, Fatima and the End of the World 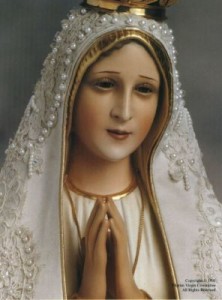 As pastor of a church dedicated to Our Lady of the Rosary, I found today’s Marian celebration in Rome very moving. Rocco Palma reports on it here–giving the text of the Holy Father’s meditation on Mary on Saturday, his homily at Mass today and links to Saturday’s papal teaching on women. An interesting side line is that the mainstream media is strangely silent about this Pope when his teaching is clearly traditional Catholic content. The most I could find on this weekend’s events was one link on the Drudge Report which said “Pope Says Church is Female.”

In our parish we moved our image of OL Fatima into the church for today’s Mass and the rest of the month of October and somehow the church’s teachings on Mary hit home to my heart today in a deeper way than ever before. As Rocco Palma observes, “If you don’t understand it can’t be explained.” In his post on Friday Rocco explains how close the Blessed Mother is to the heart of Pope Francis’ life and ministry, and how close she is to the spirituality of the people.

Mary show us the compassionate heart of her Son. She leads us to the Divine Mercy. She looks down on this broken and crazy humanity–a race headed for destruction– and says with the heart of a mother, “Come Home!” I felt these words ring true as I watched the video of the image of OL Fatima being carried through St Peter’s Square yesterday. I saw this message on the face of Pope Francis as he clearly felt great emotion as he received the image and so received Mary herself into the heart of the Vatican once again.

This also explains the Pope’s own message and method. He looks on the world with pity, not with blame. He wants to reach out to the broken hearted, the bitter and those tied in knots by sin and offer the healing forgiveness and mercy of God–just as a broken hearted father and mother looks on their wayward children.

In his consecration of the world to Our Lady of Fatima today, does the Holy Father know something we don’t know? Is a crisis looming that will bring us to a turning point in some way? Has he called on the Blessed Mother to pray and intercede for our poor, troubled insane and suicidal race? In a way it doesn’t matter. The world has always been at a crisis point. The end has always been nigh and the prayers of the Virgin have always been needed. It only remains for us to watch and wait and pray and do reparation for the sins of the world as Our Lady commanded at Fatima.

October 12, 2013
Mary Mother of God from Scripture
Next Post

October 13, 2013 Penance is a Therapy Too
Recent Comments
0 | Leave a Comment
Browse Our Archives
Related posts from Fr. Dwight Longenecker