One of the things that drew me to England was the great literary heritage. I was drawn by the life and witness of the poet George Herbert and dreamed of being an English country parson. It did happen in the end. I lived for five idyllic years in an English village on the Isle of Wight, and was prepared to move even further into the backwoods of Wales or Hereford or Somerset or some such place except that the quaint England I longed for was rapidly disappearing.

My desire was to be a country parson, so once I was in England I discovered the writings of two great country parson diarists. The eighteenth century parson James Woodeforde and the nineteenth century Francis Kilvert. Both men were children of their age. Woodeforde lived in a huge house in Suffolk and recounts his daily life–he likes recording the conversations with country folk and the great meals he ate with the squire. His writing is very amusing and full of local color.

Kilvert is the best though. Francis Kilvert was a country parson in the Welsh Marches between Hay on Wye and Hereford. He wrote three volumes of diaries, and his style is high Victorian, full of poetic description of the countryside and rural life. He is known for his fondness for the young children and old people and writes simple, but wisely affectionate observations.

A contemporary of Newman and G.M.Hopkins, Kilvert had a rather sad life. In England in the 1870s there were many men who wanted to be Anglican priests and secure a “good living”. This meant being appointed to a nice parish with a good house and a job for life. Kilvert was not so lucky. For the first year after his ordination (1864-65) he was his father’s curate (assistant priest) then he was, for seven years, a curate at Clyro in Wales. Then, for want of a better job he returned to work with his father for four years.  During that time he was poor, living in a room in the rectory or boarding in a local home, and he was certainly too poor to marry. Then he finally became a vicar in his own right, and after a short spell in one parish, in 1877 he went to be Vicar of Bredwarine. He finally married at the age of 39 but died in 1879 two days after returning from his honeymoon of peritonitis.

I was captivated by Kilvert’s diaries with their nostalgia for country life, sadness, profound and simple faith and delight in God’s goodness. I then found his life was mysteriously connected with mine during the time I lived in England.

The first connection was that he was also an Oxford man. He came up to study at Wadham College. While at Oxford I got hold of the single volume of his diaries: Kilverts Diary, 1870-1879

Furthermore, Kilvert recounts not only his visit to the seaside at Sandown, but a walk he took up from Sandown to visit the manor house at Yaverland which is right behind the church where I was Rector. He went inside the manor house and viewed the famous carved staircase and spoke to the owner at the time. Another time he walked to Brading (where I was Vicar) and described the walk up the high street and being there for the grand funeral of the Lord of the Manor–one of the Oglander family.

In 1995 we became Catholics and moved to Lancashire. After three years we moved again to Chippenham in Wiltshire and I discovered another Kilvert link. Francis Kilvert’s father was the Vicar of St Peter’s Langley Burrell–a village just outside Chippenham, and Kilvert was born in the rectory and grew up there. It was there that he ministered as his father’s curate in the 1860s and 70s.

I don’t know if my sister Denise was aware of my connections with Kilvert, but after her husband John became Bishop of Worcester they bought a country cottage to retreat to in the village of Bredwardine in Herefordshire. Bredwardine is the village where Kilvert was finally appointed to a living, and the ancient church (like most English village churches) has a fascinating history. It was there that Kilvert died too young, and it is in that churchyard that he is buried.

Denise loved their cottage in Bredwardine. I guess like me part of her wanted to live in the country in an out of the way place. She asked to be buried in Bredwardine churchyard. So next week I’ll have the sad privilege of connecting again with the beautiful soul Francis Kilvert as we travel to Bredwardine for Denise’s burial. 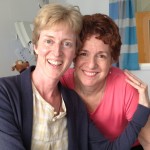 April 28, 2014 We Can't Afford Married Priests?
Recent Comments
0 | Leave a Comment
"Catholicism has always defined the ideal but there are no limits on God's mercy and ..."
Guest Tony Palmer: Is There Salvation Outside ..."
"With all due respect, Shaun, are you relegating the actual Faith to whatever the local ..."
PGMGN Notes on Tony Palmer’s Funeral
"There are good parking valets and bad parking valets. There are good housesitters and bad ..."
Elliot Bougis The Case for Conversion to Catholicism
"did you vote for Bush Fr Longenecker? would you have?"
Petey Understanding Iraq
Browse Our Archives
Related posts from Fr. Dwight Longenecker