Angels, Anointing and Peace at the Last 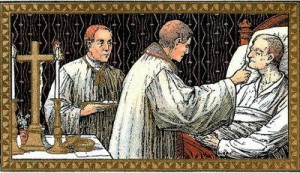 Twice in the last three days I have had the privilege of attending the death bed of an old woman.

Mostly  unconscious, they were moaning and their facial expressions indicated that they were in some distress.

I introduced myself, and found that in both cases there was a non-Catholic Christian with us–a nurse and the nursing home chaplain.

So I explained the Rite of Anointing, “We Catholics believe that the power and grace of God is administered not only spiritually, but physically. So I’m going to say some prayers with (we’ll say) Jeanine and then I’m going to lay hands on her and pray for healing. Then I’m going to anoint her with holy oil. You know, like it says in the Book of James, “If there are any who are sick among you call the priest and anoint them with oil and the Lord will raise up the sick person and they will be forgiven.”

Then I asked if they would like to join us in those prayers. Neither refused to share in the prayers with us.

So I opened my little traveling anointing case, got out the pyx, the oil stock and set up the crucifix, donned the stole and began the prayers.

At once a different atmosphere started to pervade the room.

It was as if the veil between this world and the next were opened and the invited angels began to surround us.

As the prayers continued, in both cases the women stopped moaning. I asked one if she could hear me to take my hand and squeeze it. Suddenly her hand reached up, searching for mine.

The rite is so simple and so ordinary…no signs and wonders it seemed…no amazing miracles…or so it seemed…just the Lord’s presence and the Church’s sacrament.

At the anointing itself there was a sense of quiet wonder and gratitude.

Then a prayer that the Holy Guardian angels might take her and lead her into paradise.

Then it was over.

I remember reading somewhere that Evelyn Waugh was questioned about the deathbed scene of Lord Marchmain in Brideshead Re-Visited. If you are unfamiliar with the scene, old Lord Marchmain comes home to die. He’s been a lapsed Catholic and rebellious against the church. Then on his death bed the priest comes and anoints him. When he leads through the confession he asks old Marchmain for a sign that he has heard and his will is engaged. Out of his unconsciousness Marchmain feebly makes the sign of the cross.

Waugh was challenged. “That scene was simply too unrealistic.” his critic complained. Continue Reading

Do Catholic Feminists Wish to Smash...
suspended in her jar
Related posts from Fr. Dwight Longenecker