Call on the Woman Who Tramples the Serpent 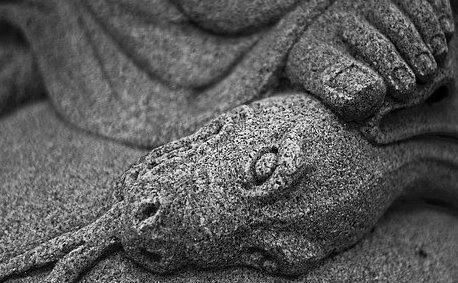 So many saints tell us that the Blessed Virgin has great power over Satan. “The rosary is the weapon against evil” they say. “Call on the Blessed Mother in time of need!” they command us. The exorcists say how the demons hate with a terrible hatred the Mother of the Lord.

Why is this and where do we get the idea that Mary defeats Satan?

The first passage is at the very beginning of the Bible. In Genesis 3:14-15:

So the Lord God said to the serpent, “Because you have done this, “Cursed are you above all livestock  and all wild animals! You will crawl on your belly and you will eat dust  all the days of your life. And I will put enmity between you and the woman, and between your offspring and hers; he will crush your head, and you will strike his heel.”

I copied here a Protestant translation on purpose to show how important translation is and how important one word can be. It says “he” will crush the serpent’s head. However, it’s not as easy as that because the original Hebrew seems to indicate that “she” shall crush the serpent’s head. Taylor Marshall has one explanation here. Others say that the pronoun could be “they” or “he” or “she”. In other words, the pronoun is ambiguous and may best be translated “they”. Jimmy Akin has further comment here. Summarizing by saying,

This has long been recognized by Catholics. The footnotes provided a couple of hundred years ago by Bishop Challoner in his revision of the Douay state, “The sense [of these two readings] is the same: for it is by her seed, Jesus Christ, that the woman crushes the serpent’s head.”

Arguments about the pronoun can be made either way, and either way, the woman has a role in crushing the serpent.

In other words Mary and her Son are engaged in the spiritual battle.

The conflict is picked up again the the last book of the Bible in Revelation 12 we read:

Then God’s temple in heaven was opened, and within his temple was seen the ark of his covenant. And there came flashes of lightning, rumblings, peals of thunder, an earthquake and a severe hailstorm. A great sign appeared in heaven: a woman clothed with the sun, with the moon under her feet and a crown of twelve stars on her head. She was pregnant and cried out in pain as she was about to give birth. Then another sign appeared in heaven: an enormous red dragon with seven heads and ten horns and seven crowns on its heads. Its tail swept a third of the stars out of the sky and flung them to the earth. The dragon stood in front of the woman who was about to give birth, so that it might devour her child the moment he was born. She gave birth to a son, a male child, who “will rule all the nations with an iron scepter.” And her child was snatched up to God and to his throne. The woman fled into the wilderness to a place prepared for her by God, where she might be taken care of for 1,260 days.

The language of the Book of Revelation is mystical. It’s dream language. Therefore, as in our own dreams, the things we see are symbolic. Time is suspended. ‘Real’ things and people are conflated with deeper meanings and the ‘real’ things become symbolic and the symbols become ‘real’. So does the passage mean?

God’s temple in heaven is opened, and we are given a little glimpse of heaven itself. The dramatic stormy imagery evokes the scenes on Mount Horeb where Moses received the Ten Commandments and where Elijah heard the ‘still, small voice’.  There, in the midst of the temple is the Ark of the Covenant. The Ark of the Covenant is the throne of God. It is the golden box that held the Tablets of the Law and the Manna in the  Wilderness. The Ark of the Covenant–according to the Fathers of the Church–is also the Blessed Virgin–the pure vessel that bore the Word of God and the Bread of Life.

The great sign that appears in heaven is a woman clothed in the sun. Just as it does in dream language, one symbol shifts into another. It fulfills the earlier symbol and opens up a new meaning. The ark of the covenant is a woman clothed in the sun, with the moon under her feet and a crown of twelve stars. What is the sun? Later in Revelation, we’re told that in heaven there is no sun or moon or stars for the Lamb is the Light in the City of God. The woman therefore is clothed in the Light of the Lamb. Standing on the Moon she is identified with the Moon itself–which reflects the light of the sun as she reflects the Light of the Lamb who is her Son. She wears a crown of twelve stars for she fulfills the promise of the nation of Israel with twelve tribes as well as the promise of the Apostolic Church–which with twelve apostles–is the new Israel. As such the woman holds in herself the People of God–both the nation of Israel and the Church. She is at once Sarah–the Mother of Israel and Mary the Mother of the Church.

The Mother is pregnant and about to give birth and cries out in pain. Some people have asked why Mary cries out in pain when the traditions about the Virgin Birth say that she gave birth without pain since pain in childbirth is a consequence of the Fall and she was free from original sin. This is to take the Revelation passage too literally. The woman is Mary, and the child is Jesus Christ, but as in all dream language, each thing carries more than one meaning. Now, caught up in the cosmic struggle, the great Mother also stands for all of creation which St Paul tells us “is groaning as in childbirth for it’s redemption.” These are the “birth pangs of the new age” They are also the birth pangs of the new age brought about by the passion of her son. His death and resurrection was a kind of death and re-birth and so her agony is a sign of her seven sorrows as a sword pierces her own heart and she identifies with the mystery of pain and suffering–the battle against Satan and the great birth that will be the consequence. Continue Reading

September 18, 2014
Could St Joseph of Cupertino Really Fly?
Next Post

September 25, 2014 Should the Catholic Church be Up to Date?
Browse Our Archives
Related posts from Fr. Dwight Longenecker