Did the pagans really worship idols? If so, what was going on?

To be precise, they did not worship idols as such, but they worshipped the gods who they believed the idols represented.

But it was more than that. They also believed that the idols became the channels for the invisible god. If you like the spirit of the god can in and through the idol.

This is why certain idols were venerated as sacred–because they were such effective transmitters or carriers of the spirit of the god.

In reading the Old Testament reading from Isaiah today it struck me. The pagan idol worship itself was a pointer to the incarnation of the Lord.

And so I revealed things beforehand,
before they happened I announced them to you,
so that you could not say, ‘My idol was the one that performed them,
it was my carved image, my image of cast metal, that decreed them.’
You have heard and seen all this,
will you not admit it?
Now I am revealing new things to you,
things hidden and unknown to you,
created just now, this very moment,

The old order of idols is overturned and something new–hidden from the foundation of the world is revealed.
Everything in the old religions were poetic pointers to the truth. Then we saw partially. We saw in hints and guesses. In Christ all is unlocked and fulfilled.
The old idols were a crude idea of incarnation one day. The gods inhabited statues of wood and stone–or so people imagined. Not only that, many aspects of pagan religion were calculated to enable human beings to be infested by the pagan spirits. Shamans and devotees would get themselves into a trance state, alter their consciousness with drugs and repetitious dancing or chanting and so open themselves to the alien spirits bringing about a kind of incarnation–in which the demon spirits took flesh.
They were crude and often horrible intimations of what was to come, but they were pointers nonetheless.
And then what was foretold not only in the Old Testament, but in all the pagan religions comes true in the incarnation of the Son of God.
By the miraculous birth God himself deems to take human form once and for all. The petty demons do not infest humans–that was a horrid mockery of what was to actually take place: the Eternal Word takes human flesh of the pure virgin and so God and man are fused. God becomes man so that man may become like God.
This is the marvel of the fullness of the Christian faith in Catholicism–that all the partial truths of the ancient past are fulfilled and completed in Catholicism.
We do not worship idols now, but we do have statues and imagery in our churches. They are not statues that are infested with spirits or images that are the channels of spirits. Instead they are images of saints–real people who have been so infused with the Holy Spirit that they have reached their full human potential and become like god. In other words they have become perfect. The sanctification of the Christian soul was also, therefore, foreshadowed by the ancient religions. Their horrid submission to infestation by alien spirits is replaced and completed by the Christian soul’s infusion by the Holy Spirit through which we become one with Christ.
As we look forward, therefore to the celebration of the Incarnation we realize that the ultimate goal is that Christ is infused into us and into all things so that the whole world might be redeemed and might “grow up into the full humanity of Christ Jesus.” (Eph. 4:13)
Previous Post 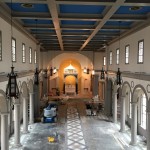