Mother of God – Defender of Orthodoxy 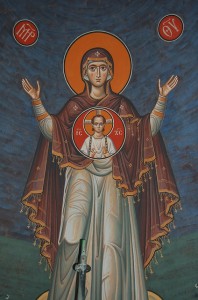 An excerpt from my book Mary-A Catholic Evangelical Debate–which will be re-published next year.

I can remember soon after I moved to England (and still a convinced Evangelical) hearing a German Catholic refer to Mary as Mutter Gottes. I don’t know German and thought he was calling Mary “Mother Goddess”. I was suitably horrified and not really surprised that this Catholic actually referred to Mary as the Mother Goddess. Only when I expressed my dismay did a friend explain that I had misunderstood. The German was using the term “Mother of God”. I tell the story to make two points. First is the reminder of how easy it is to misunderstand the viewpoints of others. We often disagree with what we think they believe rather than what they really believe in the same way that I disagreed with what I thought the German said, rather than what he really said. This instant disagreement based on our honest misunderstanding can then stymie any further discussion. The second reason I relate the story is because it introduces the term “Mother of God.” It was a term he used naturally, but from which I still recoiled.

I was dismayed by the term “Mother of God”, but I probably hadn’t stopped to ask myself why. I suppose some Christians are dismayed by our use of the term “Mother of God” because they imagine that we Catholics elevate Mary so much that we even think she was pre-existent to God the Father. This is not what Catholics believe. The logic for our use of the term is simple. Jesus was God in human flesh. Mary was his mother. Therefore Mary is termed “Mother of God.” This term theotokos was affirmed at the Council of Ephesus in the year 431. The Council upheld the title as a way of defending the true nature of Jesus Christ the God-Man.

In 431 the Council of Ephesus affirmed the title “Mother of God” or “God-bearer”, but they didn’t invent it. The term had already been in use for hundreds of years. For example, around the year 189 Irenaeus writes, “The Virgin Mary, being obedient to his word, received from an angel the glad tidings that she would bear God.” It’s important to remember that Irenaeus knew Polycarp who had been instructed by the Apostle John, so this is a very early and important witness to the attitude of the early church to Mary. The teaching of the apostles was still echoing clearly in Irenaeus’ day. He wouldn’t have taught anything contrary to their teaching.

When the title the ”Mother of God” was first formally affirmed by the church it was a bulwark to the right doctrine about Jesus. This is a very important point because, as Catholics, we believe that the correct understanding of Mary’s role and identity continues to be a strong support for the proper understanding of Jesus’ identity and role. If Mary is ignored or side-lined it is easy for Christians to treat Jesus as merely a good man. Graham Leonard has put it this way, “It is a fact of history that, if true honor is not paid to Mary as the Mother of God, people put Our Lord in her place as the highest of creation rather than adoring him as God Incarnate.” Isn’t it sometimes the case that in popular Christianity we get so chummy with Jesus that we forget he is also the incarnate God? It is true that Jesus is our friend and brother, but it is also true that he is Lord and God. (John 20:28.)

The mystery of Mary being the Mother of God is reflected in the mystery of every human birth.  As we contemplate the mystery of conception, gestation and birth we are taken into the mystery of the incarnation in a fresh and profound way. We are not separate from our mothers. Instead our lives are intertwined with theirs. Our mothers make us who we are. In Jesus’ case Mary contributed to his genetic make-up. She conceived, carried and bore him. She nursed, nurtured and loved him. If we really believe that Jesus was the God-Man we believe that he was half-Mary. As the early Christians meditated on this truth they came to understand the true importance of Mary. She was an integral part of God’s plan of salvation. So Hippolytus, around the year 217, writes, “To all generations they [the prophets] have pictured forth the grandest subjects for contemplation and for action. Thus, too, they preached of the advent of God in the flesh to the world, his advent by the spotless and God-bearing [theotokos] Mary in the way of birth and growth, and the manner of his life and conversation with men.” Early Christians like Hippolytus came to see that Mary was an integral part of who Jesus is. It is true to say that we would not have Jesus without Mary. Because of this we want to challenge non-Catholics about their historic neglect of Mary. She is honored by the vast majority of Christians in both the Catholic and Orthodox traditions, and has been from the beginning of the Christian Church. Why do non-Catholics neglect Mary so much?

January 1, 2015 Not a Resolution but a Revolution...
Browse Our Archives
Related posts from Fr. Dwight Longenecker