Saints and Angels: Out of Sight Out of Mind

Yesterday I commented that when the statues of the saints were removed from the churches in the Protestant Revolution of our time (i.e. post Vatican II wreck-ovation) the communion of saints also vanished.

The more I think about this, the more true it becomes.

Where, in your experience, have you come across a Catholic church or community that has an avid and vital devotion to the saints and also a church that has no images of saints?

I contend that when it comes to saints and angels–out of sight out of mind.

Think about it. Why were the statues of the saints removed anyway? Because someone must have considered them to be useless, antique, out of date and… useless and dusty and meaningless and too quaint for words and….useless and tied to legalistic superstitious devotions and…useless and linked with mythological concepts of heaven and hell and superstitious notions about praying to dead people and dead people praying for us and…useless.

While many Catholic lament the destruction of the churches, the removal of statues, the bashing of icons and the brutal iconoclasm we should remember that there was always a reason for what they did.

They got rid of the statues because they no longer believed in the efficacy of praying to saints. If not in fact, then in practice they denied the communion of the saints and the interaction of angels and saints with this world and the next.

What did we get instead?

Our new church of Our Lady of the Rosary in Greenville, South Carolina will have statues. Our interiors committee are working on choosing which ones and where and when. So far we’ll have two new statues of Pope St John Paul II and St Faustina in the lower church/ Divine Mercy Shrine. We are also hoping to find a seated Romanesque style Madonna and child.

In the upper church there will be two existing wood carved low relief Blessed Virgin and St Joseph. We also have an Infant of Prague which will grace our pro-life corner, we’ve identified an antique St Francis and are looking for an antique St Vincent dePaul.

I am also trying to find room for St Peter and Paul and other saints as they needed and desired.

When statues of saints are placed in churches they are there to inspire devotion, prayer and sacrifices. They are not simply “pretty Catholic stuff”.

What amazes me as a convert is how many Catholics don’t seem to understand their own religion.

Don’t get me wrong. There are many who do and they are the ones who seem to most lament what has happened to their traditional faith.

When we see images of saints they are supposed to spark in our hearts a sense of love and admiration, and a crowd of statues and icons in a church reminds us that we are “surrounded by so great a cloud of witnesses.”

We are not alone in the pilgrimage of grace, but we are part of a triumphant army of humble souls–ordinary people who have gone before us. 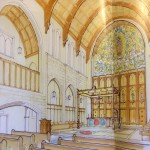 December 2, 2014
Stripping the Altars is Ripping the Heart Out of Catholicism
Next Post 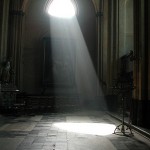 December 3, 2014 The Root of Restlessness: An Advent Hope
Browse Our Archives
Follow Us!