It seems your blogger has been mentioned as a raving right wing nut who hates Pope Francis.

A story over at Raw Story lumps me in with conservatives like Pat Buchanan, Cardinal Burke, John Vennari and Archbishop Chaput.

This is not a raw story it’s raw sewerage.

I should send the Todd Unctuous who wrote this some of the emails I get from genuinely scary right wing Catholics who castigate me for being a neo Catholic, Francis loving, compromiser.

The raw truth is, the author was lazy.

He doesn’t know me and hasn’t read any of the praise pieces I’ve written about Pope Francis.

Plus he labels me as a “Friar”. Please. Can I at least be a Benedictine monk?

If he wanted to find wild eyed conservative Catholics he might have done something called research. This would have taken him about ten minutes online and he could have found not only the venomous John Vennari, but his chum Louis Verrechio and his website Harvesting the Fruit of Vatican II website, a bit more searching would have uncovered the monster, raving, scary right wing Catholic website of them all: Demonic Infiltration of the Catholic Church…

The fact of the matter is, if he wanted to find genuinely scary right wing Pope Francis-hating Catholics he could have got some real doozies.

He should have given me a call. I could have sent him to some that would have made his mouth water.

It comes with the territory I suppose.

As long as I’m portrayed as both a raving scary right wing conservative AND a lazy, compromising, Francis loving liberal I guess I’m getting it just about right. 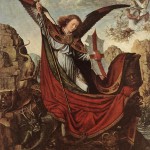 January 31, 2015 How is the Devil at Work in the World?
Browse Our Archives
get the latest from
Catholic
Sign up for our newsletter
POPULAR AT PATHEOS Catholic
1