The Importance of Patrick in Spiritual Warfare

There is this legend that St Patrick drove all the snakes out of the Emerald Isle.

“Hogwash!” say the skeptics.  “Typical of gullible Christians to believe in superstitious miracle stories. There never have been any snakes native to Ireland. The climate is too cold.”

However, there is more to the legend than the literal meaning.

St Patrick didn’t drive snakes out of Ireland. He drove the serpents out of Ireland, which is another way to say that he was a powerful exorcist and drove the demons out of that harsh and pagan land.

I had a very vivid dream once which made me see the story of Patrick and the snakes in a different way.

In my dream I was in an old English country house and there was a beautiful woman there, sitting in contemplation. When I asked who she was the answer came, “She is the Lady of the House”

At first I thought she was simply an aristocratic Englishwoman, but then I heard the servants say, “She is Our Lady.”

In my dream I left the house and went outside and there before me was a low, slow English river. A group of boys were playing by the riverside, about to jump in and go swimming.

I saw on boy dive in and allow himself to be taken by the current.

To my horror I saw around the bend in the river a huge crocodile waiting for the boy–who was completely oblivious to the danger.

I ran up and down the river bank trying to warn him but it was too late.

The crocodile already had him in his jaws.

At that moment from upstream came a burly man all dressed in green country walking clothes–a waxed jacket, green rubber boots and dark green corduroy trousers. He had a full beard and a booming voice like the actor Brian Blessed. He was surrounded by a pack of children–like boy scouts and girl scouts out on a hike.

I called to him for help and he said, “I’m Patrick. What can I do to help?”

When I pointed out the lad being devoured by the reptile he called out to the crocodile to drop the boy.

Then he jumped in and pulled the boy to safety. When I looked up I saw that the woman from the house had come out and was quietly watching the whole scene with a benevolent look of approval.

I understood then, that the boy had been swallowed by the serpent, the reptile, the devil. Patrick was an exorcist who was able to deliver the boy from the jaws of death.

Suddenly, through this dream, I understood the real importance of St Patrick.

A powerful preacher, he was also a powerful exorcist. He conquered the crocodile, repelled the reptile, trampled the serpent and expelled not the snakes, but the old serpent from Ireland.

Furthermore, I saw that he still has this function today and in my own prayers and when I offer prayers of deliverance for those who are bound by sin and the serpent it is St Patrick who I invoke for special help and strength in the great battle. 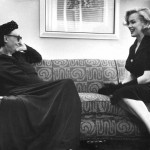