A Communist Crucifix? The Devil is in the Dialogue 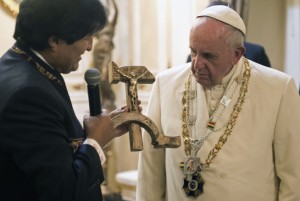 This news article attempts to whitewash the Bolivian president’s tasteless and offensive gift to the Holy Father: a Communist Hammer and Sickle turned into a crucifix.

“You can dispute the significance and use of the symbol now, but the origin is from Espinal [an assassinated left wing Jesuit] and the sense of it was about an open dialogue, not about a specific ideology,” Lombardi said.

He noted the context in which Espinal was living: as a priest working for social justice in Bolivia during a period of instability that preceded a right-wing dictatorship known for human rights abuses.

However, one of Espinal’s friends and fellow Jesuits, the Rev. Xavier Albo, said Espinal’s intent was for the church to be in dialogue with Marxism, and said Espinal had altered his crucifix to incorporate the Communists’ most potent symbol: the hammer and sickle.

Why is it that it is always the avowed enemies of the Catholic faith who are always calling for “dialogue”?

I can’t help thinking of the Garden of Eden in which Satan got the whole show going by insisting on dialogue…..”Did God say you will die? Surely he didn’t mean that literally….”

That’s the way dialogue usually goes. It’s most often an attempt to dialogue away the truth–to make it fuzzy and ambiguous.

Those who are interested in dialogue usually want to re-interpret the truth, find other “fresh perspectives” and bring “creative viewpoints”

I don’t buy it. The Scriptures say, “What fellowship has light with darkness?”

Dialogue is okay up to a point, but the point is that dialogue is meant to bring new clarity and a final resolution.

What did G.K.Chesterton say? “The point of having an open mind is the same as having an open mouth…that eventually you need to close it on something solid and nutritious.”

I think Pope Francis’ response to the Communist Crucifix was the right one. 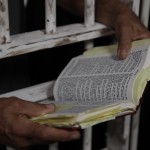 July 10, 2015 Ten Things to Remember if You're Worried About Persecution
Browse Our Archives
Follow Us!

Biblical Evidence for Lent & Practices of Asceticism
Someone asked me on my Facebook page: "How come we celebrate...
view all Catholic blogs
Copyright 2008-2020, Patheos. All rights reserved.