An Ideologue or an Egotist?

An Ideologue or an Egotist? October 11, 2016 Fr. Dwight Longenecker

A friend recently voiced their doubts and fears about a Hillary Clinton presidency and it made me think.

In a few weeks’ time Americans will go to the polls. Over the last year I have posted harsh words about Donald Trump, and people have got on my case for it. “Oh Father, why are you being so political?” I find people only object to a priest being “political” when he is criticizing the candidate they like–but that’s another matter.

There is another distinction between the two candidates, however, that ought to be considered. Trump may be an egotist, but Hillary is an ideologue.

An egotist is out for himself and nobody else. He is likely to be a greedy, lustful, dishonest bully. An egotist can ride roughshod over others to get his own way and will always believe himself to be superior and to deserve everything he grabs for himself.

However, an egotist might just, maybe, if we’re lucky, realize what a stinker he is. He’s not in it for anything other than himself, and he might just wake up one day and realize that its empty, he’s empty and doing everything for himself is not getting him anywhere.

In other words, the egotist is reformable. The egotist might realize what an idiotic, immature person he is being and want to be better.

The egotist might just figure out that what he has done is bad. The ideologue never will.

Secular ideologues are also utilitarians. They believe that works is good and what does not work is bad. If abortion reduces the number of poor people or black people or Hispanic people, then abortion is good because it helps to eliminate poverty. If euthanasia helps reduce the number of infirm, expensive and helpless old people, and getting rid of them helps the economy, then euthanasia is good.

If “equality for all” is an ideological dream then anyone who seems to stand in the way must be eliminated.

Anyone who has picked up on my thoughts over the last year will know that I think Trump is a bad man and will be a bad president, but at least he might one day realize he is a bad person.

Hillary Clinton will never come to that realization about herself.

So I guess people will have to choose: the Ideologue or the Egotist. 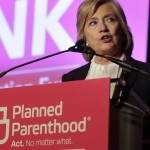 October 11, 2016 Clinton's Anti-Catholic Team
Browse Our Archives
get the latest from
Catholic
Sign up for our newsletter
POPULAR AT PATHEOS Catholic
1