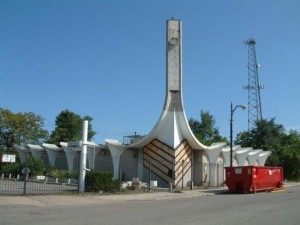 The tired and emotional progressives at National Catholic Reporter have published a piece which actually praises the brutalist “Catholic” suburban architecture of the seventies and eighties.

Restoration-minded pastors, most who came of age well after Vatican II, are ordering the changes. Gone are what they sometimes disparage as “Pizza Hut” churches. The goal is to restore tradition. They impose altar rails, the placement of the Blessed Sacrament near the altar, and use expensive marble on the floor to seal off the sanctuary area as a polished and exclusive arena for clerical liturgical action. Sometimes the choir gets relegated to a back loft, providing disembodied sound. In other parishes, circular seating arrangements are abandoned in favor of long rows of pews.

The loaded language is transparent. The priests “impose” altar rails. They use “expensive marble” to “seal off the sanctuary as an exclusive area for clerical liturgical action.”

DeSanctis uses a local church in Erie to illustrate his annoyance at the modest renovations–where pastors have tried to bring into ghastly churches even just a touch of what used to be recognized as Catholicism.

Elaborate candles now serve as boundaries to mark off the sanctuary from the pews. The altar area has now been transformed by marble, visually setting itself off. The new architecture, intended to recapture traditional elements, has a “look at me” clerical mindset.

He notes that such changes are examples of “fussy territoriality” expressed through physical changes made by “a wave of priests intent on undoing the achievements of their immediate predecessors, a generation or two of men animated by the liturgical reforms of the Second Vatican Council.”

DeSanctis’ complains that setting the sanctuary apart visually is a new form of “look at me” clericalism. But the formal instructions for the sanctuary actually call for it to be set off visually from the rest of the church. As for “clericalism”  The General Instruction of the Roman Missal says the church is hierarchical and the architecture should reflect that:

The People of God which is gathered for Mass is coherently and hierarchically ordered, and this finds its expression in the variety of ministries and the variety of actions according to the different parts of the celebration. Hence the general arrangement of the sacred building must be such that in some way it conveys the image of the assembled congregation and allows the appropriate ordering of all the participants, as well as facilitating each in the proper carrying out of his function…The Priest Celebrant, the Deacon, and the other ministers have places in the sanctuary.

All these elements, even though they must express the hierarchical structure and the diversity of functions, should nevertheless bring about a close and coherent unity that is clearly expressive of the unity of the entire holy people. Indeed, the nature and beauty of the place and all its furnishings should foster devotion and express visually the holiness of the mysteries celebrated there.

The GIRM continues: “The sanctuary is the place where the altar stands, the Word of God is proclaimed, and the Priest, the Deacon, and the other ministers exercise their functions. It should be appropriately marked off from the body of the church either by its being somewhat elevated or by a particular structure and ornamentation. It should, moreover, be large enough to allow the Eucharist to be easily celebrated and seen.”

The GIRM is the universal instruction for proper celebration of the Mass. It is not an obscure document, but is printed at the front of all full sized missals.

DeSanctis claims to be a “church building consultant” and is unaware of this?

“Architecture is how we express our liturgy,” DeSanctis recently told NCR in a phone interview, noting that the generation of post-Vatican II priests routinely came out of the sanctuary to interact with their parishioners during liturgy. They built churches with a focus on circular design, to bring the congregation closer together, as well lowered the altar to bring the priest closer to the congregation.

Our new church at Our Lady of the Rosary has an elevated sanctuary, no marble, but set off with a some tile flooring. When a visiting priest dropped by he asked in a sarcastic way, “Why is the altar way up there?” His implication was “You’re all about separating the priest from the people…” Happily the architect was present and explained, “The church calls for full participation of the people in the Mass. They can’t participate if they can’t see what’s going on. The sanctuary is elevated not to elevate the priest, but so the people can all see the Mass.”

He went on to explain about sight lines and that if people are at a distance from what is going on either the floor for the congregation needs to be raked as in a theatre or the platform for action need to be elevated. Otherwise people can’t see.” In other words, the sanctuary is elevated so the people can actually see what is going on. In a large church it seems very folksy and friendly for Father Freeforall to come down and wander among the people like a game show host, but the fact is, most of them can’t see him when he does.

DeSanctis also does’t like choir lofts and rows of pews

Sometimes the choir gets relegated to a back loft, providing disembodied sound. In other parishes, circular seating arrangements are abandoned in favor of long rows of pews.

Our new church has a traditional choir loft in the back. Here are the practical advantages: 1. The choir has lots of chairs, books, music stands and other paraphrenalia. They can keep all that stuff up there where they need it and not clutter up the space where worship is happening. 2. There is room for a pipe organ. Pipe organs are actually recommended and praised by our bishops. Why? Go here. 3. The choir and organist can see clearly what is happening in the liturgy and complement the worship 4. A choir director waving his or her arms about conducting is distracting. In the choir loft you can’t see it. 5. Choir members prefer to be heard and not seen. If that is not true there’s a problem.  6. Choirs and singers up front contribute to the entertainment feel of modern worship.

Circular seating arrangements? The comments I hear from the people who use these churches are, “I don’t really like having to sit and look at everyone else the whole time.” They say, “I am always distracted from worship by looking at the people on the other side of the room. I see them getting bored. I see the misbehavior of their children. I see them falling asleep. Its much more difficult to focus on the Mass in a round church.” They say, “Everything in the round church is about us. It is people centered worship rather than God centered worship.”

What deSanctis never references is something I have discovered in helping to build a new church in our parish, and in my visits to churches across America.

Whenever I visit one of the all too common suburban American Catholic churches that look like a cross between a flying saucer and a parking garage I ask the parishioners how the church came to be built and whether they think it is beautiful or not and whether the like it.

Keep in mind that these churches were built “for the people of God”. They were built in a wave of egalitarian idealism, but I have heard multiple stories about how Father Freeforall in the 1970s swept in and designed the church and told them this was the modern age and this was the church they were going to have. DeSanctis complains that the restorationist priests are “clericalists” who “impose” things. In fact the clericalists were the ideologically driven priests of the 1970s and 80s who imposed brutalist, modernism on their faithful people not only in architecture but in theology, pastoral practice and preaching.

It was kind of like the priest was saying,  “Now you listen to me. We are getting rid of clericalism whether you like it or not…”

I also ask the people whether they like their modern supermarket style church. They try to be polite and they get this wounded, nostalgic look on their face and say things like, “The padded pews are really very comfortable!” or “The sound system is really good.” Or they change the subject and start enthusing about a parish across town where the people and pastor have just built a new traditionally styled church. If they are older they hearken back to the days before all the changes and say, “There was something holy about those old churches.”

As a somewhat conservative Catholic I have been accused of imposing a traditional church on our people.

But I can honestly report what took place: When I went to a parish and the people told me they had been trying to build a new church for the last fifty years but they just hadn’t got it done. Would I help? At the first building committee meeting I didn’t “impose” anything but asked, “Do you want a modern round type church or a traditional looking church?” The uproar was unanimous: “We have had all the consultations already. Everyone wants a traditional church. No one wants a round church. We hate round churches. We want our church to look Catholic. We want stained glass windows. We want it to be beautiful.”

Finally here are some pictures. One is the new church at Our Lady of the Rosary. The other is a fairly typical modern American suburban church. 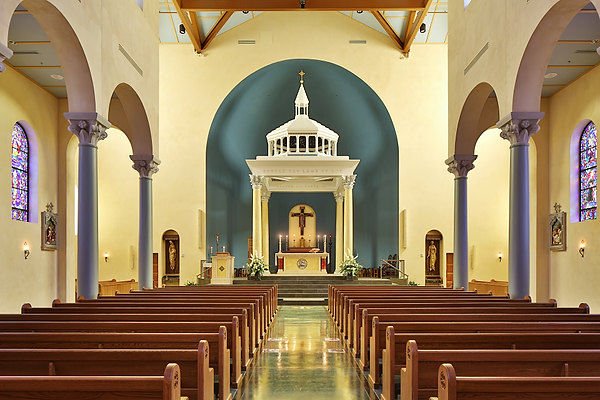 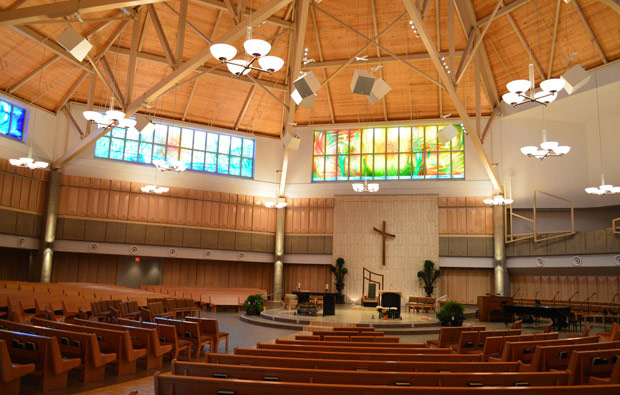 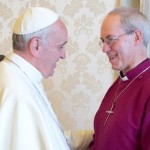 April 13, 2017
Why the Vatican Sounds Increasingly Anglican
Next Post 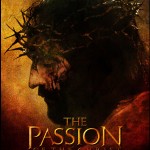 April 14, 2017 My Scene in The Passion of the Christ
Browse Our Archives
get the latest from
Catholic
Sign up for our newsletter
POPULAR AT PATHEOS Catholic
1