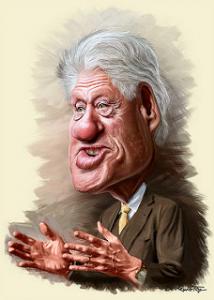 In a hard hitting article at The Atlantic Caitlin Flanagan attacks the amazing hypocrisy of the left concerning Bill Clinton. At a time when it seems to be open season on all sexual predators–no matter if their crimes are thirty years old–Flanagan wonders why Clinton continues to rise above his murky past.

First she points out the present public relations schmooze job on Clinton. He’s now a warm hearted and cuddly Grandpa:

How vitiated Bill Clinton seemed at the last Democratic convention. Some of his appetites, at least, had waned; his wandering, “Norwegian Wood” speech about his wife struck the nostalgic notes of a husband’s fiftieth anniversary toast, and the crowd—for the most part—indulged it in that spirit. Clearly, he was no longer thinking about tomorrow. With a pencil neck and a sagging jacket he clambered gamely onto the stage after Hillary’s acceptance speech and played happily with the red balloons that fell from the ceiling.

When the couple repeatedly reminded the crowd of their new status as grandparents it was to suggest very different associations in voters’ minds. Hillary’s grandmotherhood was evoked to suggest the next phase in her lifelong work on behalf of women and children—in this case forging a bond with the millions of American grandmothers who are doing the hard work of raising the next generation, while their own adult children muddle through life. But Bill’s being a grandfather was intended to send a different message: Don’t worry about him anymore; he’s old now. He won’t get into those messes again.

But Flanagan the blows the whistle and asks why this wealthy white man should be allowed to get away with his crimes while so many other celebrities have either been brought down, are running for cover or are staying up nights wondering if that girl or that boy from so long ago will suddenly decide to go public.

In case anyone has forgotten Bill Clinton’s crimes Flanagan takes some column space to remind us:

Yet let us not forget the sex crimes of which the younger, stronger Bill Clinton was very credibly accused in the 1990s. Juanita Broaddrick reported that when she was a volunteer on one of his gubernatorial campaigns, she had arranged to meet him in a hotel coffee shop. At the last minute, he had changed the location to her room in the hotel, where she says he very violently raped her. She said she fought against Clinton throughout a rape that left her bloodied. At a different Arkansas hotel, he caught sight of a minor state employee named Paula Jones, and, Jones says, he sent a couple of state troopers to invite her to his suite, where he exposed his penis to her and told her to kiss it. Kathleen Willey said that she met him in the Oval Office for personal and professional advice and that he groped her, rubbed his erect penis on her, and pushed her hand to his crotch.

Why did Bill get away with it? Because the feminist mafia backed him up. He was giving them what they wanted.

It was a pattern of behavior; it included an alleged violent assault; the women involved had far more credible evidence than many of the most notorious accusations that have come to light in the past five weeks. But Clinton was not left to the swift and pitiless justice that today’s accused men have experienced. Rather, he was rescued by a surprising force: machine feminism. The movement had by then ossified into a partisan operation and it was willing—eager—to let this friend of the sisterhood enjoy a little droit de seigneur.

Flanagan goes on to examine further the mutual back scratching that went on between the Clintons and feminist sisterhood. Hillary Clinton, of course, was one of the biggest hypocrites in the scandals. While flaunting her feminist credentials she allegedly did everything she could to bully Bill’s accusers, marginalize and silence them.

What Flanagan doesn’t go into is why it was so important for the feminists to defend the sleazy Clintons.

One doesn’t have to dig very deeply to figure it out. The feminists wanted abortion, abortion abortion and Bill and Hill were only to happy to join their campaign.

Yesterday I was talking to Jim and Joy Pinto who, in addition to their work as presenters at EWTN work at a crisis pregnancy center in Alabama. They explained again how harmful abortion is to women’s health. Not only are the abortion procedures invasive physically, but the powerful drugs used to induce abortion mess up the woman’s body, mind and spirit. Furthermore abortion wounds the woman’s conscience, batters her self esteem, destroys her confidence and often drives he into a cycle of depression, fear and guilt.

The final cruel irony in all of this is that the Clintons and their murky colleagues in the feminist movement are all about helping women.

With the present witch hunt against abusers of women, what if the tide is actually turning and Bill Clinton would join Harvey Weinstein and be held accountable for his sleazy past? 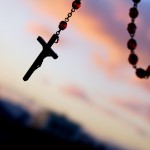 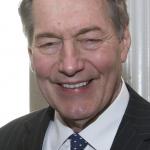