The Undeniable Witchiness of Harriet Tubman

After watching the 2019 movie Harriet, about Harriet Tubman, I found myself even more impressed with the US underground railroad leader and freedom fighter than ever before.

I also learned that Harriet was pretty damn witchy.  In other words, it appears she had abilities and powers that are common to many modern-day witches.

However, there are undeniably witchy aspects of her.  And even though certain dramatic liberties were taken in the movie, many of the witchiest things about Harriet Tubman are indeed factual, at least according to her authorized biography.

The Death of her “Master”

Harriet prayed for the death of her viscously cruel “master.”  About a week afterward, he actually died.

While correlation isn’t causation, I wondered–could Harriet’s prayer have actually been a curse?  Perhaps she had this power and she wielded it against him in a fervent prayer/petition.  In any case, it was quite effective.

Harriet experienced visions.  She also heard voices.  These have been attributed to a head injury and resulting epilepsy or narcolepsy, but Harriet interpreted them as communications from a higher power or God.

Her visions were often prophetic.  These, combined with dreams and voices, helped her find her way.  They guided her toward the right paths and to the right people.

Harriet said that, at times, she felt that she was floating above the earth.  This certainly sounds like astral projection to me.

In my opinion, it’s a trademark of a witch, if only because so few religions acknowledge the reality of astral projection.

Harriet often used disguises to move through areas unnoticed.  Her costumes must have been good because she was never caught.

However, there could have been some magic in there as well.  Maybe she used a bit of glamor to throw people off.

Perhaps Harriet had the power of invisibility at times.  She made 19 trips with somewhere between 70-300 people and never got captured.

How else does someone travel in a group for hundreds of miles from slave-states into free ones?  Invisibility certainly couldn’t hurt.

In addition to her visions, dreams, and hearing voices, Harriet was also deeply connected to her intuition.  There were many times she felt she had to do something or go somewhere only to find that she arrived before disaster struck, just in time to save her loved ones.

Harriet led an assault attack in the Civil War, which freed over 700 slaves.  Whether she was divinely aided or not, the ability to inspire and incite this kind of movement, and then lead the charge takes serious power and victorious energy.

Like many Christians who have visions, Harriet walks the line between pious Christian and heretical witch.  Joan of Arc had a similar witchiness and victorious power, and she was burned at the stake for being a witch.

The truth is that many witches have the same kinds of experiences that Harriet has.  In fact, it’s how many of us knew we were witches.

I highly recommend seeing the movie Harriet.  It’s gorgeous, and Cynthia Erivo’s intense acting of  casts its own spell.  It’s easy to see why Erivo and the movie were nominated for numerous awards.  (By the way, the standoff scene at the end is fabricated, but it’s good drama.)

Although the subject matter of the movie can be heavy at times, it makes me feel that we’ve come a long way since those times, even if we still have a ways to go with genuine race equality.

Harriet is utterly uplifting and empowering.

Note from the author:  I use the word master in quotes with the greatest intentions, respect, and beliefs in the equality of all human beings.  I am aware this equality was not acknowledged in the era of slavery.  It just felt wrong to write “her master.”  The concept that one person could be the master of an unwilling person goes against everything I stand for.  Although using the phrase “master”  isn’t a perfect work-around, it feels far better to write this than to write “her master.”

April 9, 2020
New Gods: The Future Of Paganism And Witchcraft?
Next Post 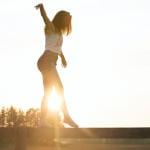