Protecting Kids’ Heart-Deep Identity: A Note to Parents about Instagram

I found this post by Sarah Brooks on her delightful blog Life as of Late. She graciously allowed us to repost it.

There is so much information out there about internet safety and you should definitely read up on that, but that’s not what I want to talk about.

Over the past several months, I’ve been noticing some interesting stuff on Instagram from your kids that I want to share with you.

“Hey, weirdo, why are you following my kids?” Good question, and I’ll get to that.

I am 25 years old, which is not just a fun fact, but important in the history of social media. MySpace started during my high school years, and Facebook started the year I went to college (when it was still just a site just for college students). So while my generation didn’t grow up with it, we were the first to use it. We’re bilingual, in a sense.

Your kids, on the other hand, don’t know a life without it and you’re doing your best to learn and keep up with it. So would you mind too terribly much if I acted as a bridge for a second? Give you some thinking material?

Let me back up.

My husband and I, along with our friends Kylie and Trenton, help in the youth ministry at our church. (Shoutout to the GREATEST 6TH GRADERS EVER!)

Several months ago, Kylie and I were asked to talk to the 8th graders at the middle school girls’ sleepover.

The topic was “Finding your identity in Christ“.

I would have much rather talked to them about sex or drugs or something, because those are pretty concrete topics. We’d stand up and say, “Don’t do it.” End of talk. It would be so moving we’d be asked back to speak at every event, naturally.

Instead, we were tasked with talking about something that a lot of adults I know don’t even know how to apply in their own lives.

After much thought and prayer, we decided to talk about something we know: social media. We talked about Instagram specifically, since a lot of these girls aren’t on Facebook yet and think Twitter is stupid.

I’m sure you’re aware of Instagram if your kids are on it, but if not, here’s a rundown of the app:

I love the app. It’s a lot of fun, but there are some components to it that I’m not sure we’ve thought all the way through.

Think back to when you were in junior high. How did you know you were “cool”? A popular girl probably wrote you a note and put it in your locker or asked you to sit with her at lunch, right? There were a few eyewitnesses and it was pure joy.

Your middle schooler buys a new shirt and what’s the first thing she does? Takes a selfie (self-portrait, for those out of the loop) and posts it on Instagram.

A quick search of Instagram shows us… oh, look! – this was posted 18 minutes ago: 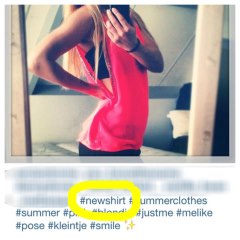 Ok, so not a big deal, this is how the world is. Your kids feel the need to share every single decision they ever make with the world at large. It’s just “kids these days”.

It’s true. It is “kids these days”. But does the feedback they receive on Instagram impact them? Do you think they base their identity in it?

What happens when your daughter’s new shirt picture didn’t get as many “likes” or comments as the picture her friend posted of her new shirt?

Do you think she even cares about that stuff? 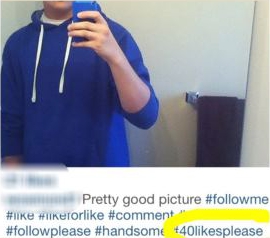 This guy specifically asks for comments AND a certain number of likes. 40, to be exact.

[Side note: don’t forget to read what your kids post in the hashtags of their photos. (That’s the # sign with a bunch of words crammed after it, like #40likesplease.) They use it as an aside comment, which, parents, is just as important to pay attention to as the photo caption.]

We’re no longer in world of handwritten “circle yes or no” notes between two people; your kids are living social lives on a completely public forum.

This is not new information.

But, taking it a step further: have you considered that your child is given numerical valueson which to base his or her social standing? For the first time ever your children can determine their “worth” using actual numbers provided by their peers!

Your daughter has 139 followers which is 23 less than Jessica, but 56 more than Beau. Your son’s photo had 38 likes which was 14 less than Travis’ photo, but 22 more than Spencer’s.

See what I mean? There’s a number attached to them. A ranking.

And if you think they don’t actually pay attention to this stuff, read the hashtags on these photos:

At arguably the most awkward time in their lives, a crucial time of development when they are trying to figure out who they are and where they belong, this is what they’re up against. A quantifiable popularity ranking.

So, back to the lesson we were supposed to teach. I started thinking about everything I’ve mentioned above and thought, “Maybe our girls are different. Maybe their faith buffers them from being caught up as deeply in this as their friends.”

In talking to our girls, I was blown away by their responses:

They know exactly – to the digit – how many followers they have (and who they follow that isn’t following them back). They get their feelings hurt when the popular kids “like” the pictures above and below theirs on the Instagram newsfeed, but not their picture. They delete pictures of themselves when they don’t get as many likes as they were hoping for. They don’t get invited to parties, but see all the fun they missed out on in every photo posted from it. They post ugly pictures of their friends to get revenge for some heinous act they committed (like saying Louis is their favorite One Direction member).

Before we all freak out and delete Instagram and all other social apps, may I just say (with approximately zero authority or expertise on the subject):

This is no cause for mass hysteria. My intent is not to scare you away from these sites, because I don’t think the solution is to write them off entirely. This is a part of your kids’ communication that is here to stay. (I don’t just mean Instagram – it could die tomorrow. But social media? It’s here for good, in some form or fashion.)

Remember: social media can be SO FUN. (I know you love you some Pinterest, girl.)

Plus, not all kids are the same. Some place an unhealthy amount of self worth in their social media accounts, some could care less about it. Regardless, it’s important to think about no matter where your children fall on the spectrum.

My intent is to dig a little deeper into the impact these sites can have on your kids. To start thinking about how to safeguard childrens’ hearts and minds against what appears to a 12 year old to be concrete numerical evidence about their value and popularity.

How do you regulate activity on these sites while keeping it fun for your kids? How do you talk to them about the numbers (likes, comments, followers) provided by their peers not being an accurate representation of their value and worth? How do you teach them to base their identity solely in Christ – to be confident daughters and sons of the King?

I can tell you what we talked about with our 8th grade friends:

What we said isn’t really important. What’s important is where you come in, parents. You know your kids and you know the insecurities they face.

I hope this information is helpful for you, or at least gets you thinking. Or, if all else fails, got you to smile at my own Instagram picture of my son in his Little Tikes truck at Sonic. You know that’s cute.

I love your kids so, so much and I want them to know just how special and wonderful and unique they are. I don’t want a stupid thing like followers and likes to tell them any differently.

Other posts from Sarah:

Should your kid SnapChat? (And what is SnapChat?) 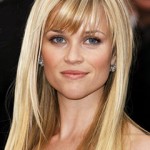 April 22, 2013
Hey Internet, Stop Piling on Reese Witherspoon for Getting Arrested
Next Post 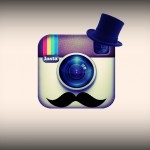 April 30, 2013 Instagram and Your Kids: Advice for Protecting Their Safety and Their Self-Image
Recent Comments
23 Comments | Leave a Comment
Browse Our Archives
Related posts from Tinsel

23 responses to “Protecting Kids’ Heart-Deep Identity: A Note to Parents about Instagram”