Review: After Watching Matt Damon’s ‘Elysium,’ You’ll Want to Register as a Republican 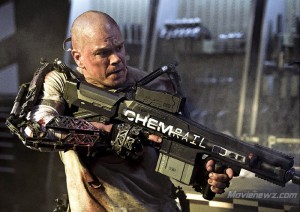 Shhh….Don’t tell Matt Damon, but something went sideways and he made a conservative manifesto in Elysium.

It’s pretty much a warning about what will happen to Earth if socialism wins.

Elysium takes place in the near future, after the entire earth suffers under the kind of economic meltdown threatening some of our great cities now. It’s dusty. It’s dirty. It’s unkept. No one has families or cars decent homes or fresh clothes or, apparently, showers. Jobs are dreary and dangerous and unsatisfying, if you can find them at all.

Total economic meltdown. Here is a partial list of places where this sort of systematic economic failure has happened or looms:  Detroit.  California. Illinois. The Soviet Union. Cuba. Greece. Spain.

Not, say, Texas or Virginia.

In this fantasy dystopian future,  as in socialist Greece, Spain, and Detroit, the wealthy do fine.

The ultimate white flight has taken place to a distant low-orbit suburb. Those with the means to do so have moved on up to a deluxe space-age apartment in the sky.

Wouldn’t you? If you could? After all, Elysium has trees, lakes, clean air, and effective hair care products.

I hear even Matt Damon doesn’t live in Compton.

So I’m assuming it was socialist policies that brought the earth to its dystopian future. The elite have done their damage and left. Fair, based on the historical evidence, right?

But wait..there’s more. The rich people of Elysium have something more: Magic.

It’s presented as science, but it’s really magic. They have medical beds which will fix any ailment.  Leukemia? No problem.  A face torn off by a grenade? Please. A persistent pimple? Step on up.

The sufferer lays down on a sort of futuristic tanning bed, and — abracadabra — it’s all fixed by a wave of the machine’s pseudo scientific wand. For free!

Naturally, Elysium-ites would kill rather than share these magic machines with the stinky riff-raff below them.

Matt Damon is Max, an orphan of Earth whose poverty has not ruined his good looks. The Man, in the form of police droids, keeps keepin’ him down, but Max keeps on keepin’ on.

That is, until an industrial accident in his heartless factory sentences him to a nasty death. Dismissed without so much as a thank you, he hatches a plan to break into orbit and heal himself.

As you can imagine, his plan meets resistance by those who would rather lose a highly trained and reliable worker than give him a ride on the costless healing machine.

And have no concept of economics. 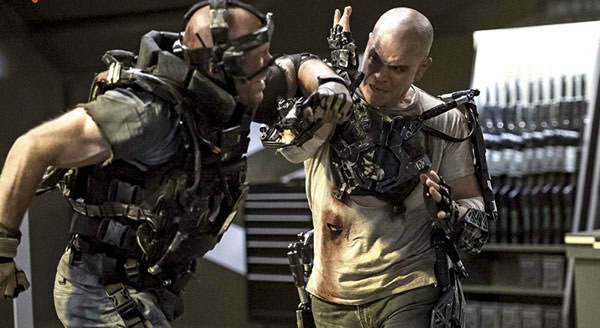 This resistance leads to several gruesome battles to the death, lots of staggering about half-dead dripping blood, and an icky medical procedure that is not AMA approved. All this violence earns the film an R rating. It’s studded with profanity but devoid of sexuality. Apparently their lives are too dreary, desperate, and poverty-stricken to enjoy the pleasures of sex.

It features that strobe-light, screechy-sound, gritty, gory, intense violence that some love. If you like that style (I usually don’t), it’s well done. My husband loved it.

Let’s just say gun control is not an issue in this particular liberal world.

Damon, always a fine actor, does a decent job as wounded anti-hero Max but Jodie Foster is wasted as a one-dimensional power-hungry security honcho. In fact, this film suffers from a black and white one-dimensionality that leaves all the characters flat and unrelatable.

Director Neil Blomkamp, who also wrote the script, hails originally from South Africa. His fantastic 2009 film District 9 and Elysium are very much him working through issues related to South African oppression and apartheid. People trying to fit his movies into an American frame of reference will find it doesn’t exactly fit.

But as it’s the only frame of reference we have, we will try.

You see, the teeming masses of Earth are desperate for one thing: to physically get to Elysium. They cannot think of any way to solve their problems other than physically inhabiting the glorious mansions with their magic medical tanning booths.

In fact, the only person with any enterprise in the entire movie, from Elysium or Earth, the only one who actually produces a something of value, presumably to sell, is a random woman with a cart full of pigs. She seems to be doing fine.

The rest of the populace sits around planning minor heists and gambling in the  streets. They are victims, and only victims, never taking a step toward their own futures.

They stare at the great habitat in the sky in helpless longing. It is all they are capable of.

Once again, liberals secretly despise the people for whom they say they are fighting. Those people could never build a society worth living in. Those people can only be rescued through redistributing other people’s stuff. Those people are incapable of helping themselves.

And when they do – SPOILER – finally overrun Elysium, the watcher squirms, knowing that Elysium, which is roughly the size of New York City, cannot possibly contain all of the huddled masses of the entire earth. Its wealth will be distributed and then will be gone like a whiff of air.

Memo to Matt Damon, et al: The only way to lasting prosperity is to create production, not to take something. Because once you take what you take, it is gone and there is nothing to replace it.

It’s enough to make one run out and change voter registration. Or start a small business.

Thanks, Matt Damon, for the morality play showing us EXACTLY what we don’t want. 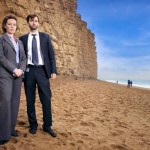 244 responses to “Review: After Watching Matt Damon’s ‘Elysium,’ You’ll Want to Register as a Republican”