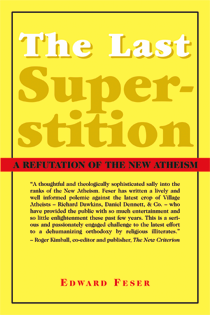 I ran into a Dominican at an American Association for the Advancement of Sciences event in DC, and now I’m reading and arguing about Edward Feser‘s The Last Superstition: A Refutation of the Last Atheism with him and another brother at the priory.

This seems like a nice opportunity to explore the ‘non-nihilistic metaphysics logically require theism and probably Christianity’ pitch that I’ve gotten from plenty of Christians and more than a few atheists.  Hopefully the discussion will put me in a better spot to answer Dom’s challenge.  All posts about this book will be listed here, with the first one coming out Monday.  And, for everyone’s convenience, since Feser spends a lot of time on Aristotle, I’ll put his summary of the Four Causes here for reference.  (His quickie explanation applies all four to the example of a red rubber ball).

Strict materialists and plenty of other people think final causes are nonexistent and/or incoherent.  My posts on the topic follow below:

January 15, 2012 Reading a Book I'd Never Write
Recent Comments
106 Comments | Leave a Comment
"Back to Square 1 ... ¯\_(ツ)_/¯Season 3!G.657BW.CO/d5573Y"
Bobby Klein My Good Catch Catches Them All
"We all are meme thiefes here 😂🙃fM.9226B.US/fA5573BU"
VanguardAI Books on deck for me for ..."
"To understand an art, you must understand phynomena."
Unlcuky13 I’m speaking about my conversion in ..."
"Despite the differences in level, it's still an excellent manga.pt.2632W.US/U5573xM"
Pilzkeks Dissecting the Catholic Vote for FiveThirtyEight
Browse Our Archives
Related posts from Unequally Yoked