“Meditation is the key.”

That’s what the leader of our school used to say.

Meditation is not fun.

Maybe for some people it is. For me it has always been a huge struggle and I no longer even try to do it.

When I was a little kid, my parents would meditate for half an hour at dawn and at dusk every day no matter what. I was intrigued. My mother tells me that I used to have my Barbie dolls sit and meditate. The thing I most wanted to know what what exactly my parents were doing. They told me that there was a mantra, which they used to focus their minds. I wanted to know what the mantra was. They wouldn’t tell me.

It was a special word. A sacred word. It could not be shared except through the initiation ceremony that I could go through when I was thirteen.

Like most children, I was terrifically curious and wanted to know everything about everything, so it bothered me a lot that I didn’t know what this secret word was.

You would think with that much lead up and anticipation, that I would really take to meditation. When I was thirteen, I finally started the preparation classes that culminated in a special ceremony. The meeting house we went to was scrubbed and decorated with flowers (I helped with the cleaning the day before!). In the kitchen I was given a basket with a piece of fruit, a flower, and a clean white handkerchief in it.  My mother told me the things represented purity and also an offering to the teacher who had flown in all the way from England to initiate the class.

I climbed the stairs with trepidation. I wanted to be worthy of this gift. I wanted to show how grown up I was. Someone upstairs guided me to one of the classrooms. Inside was a man wearing a three piece suit and sitting up very straight in a stiff-backed chair. Cautiously I approached and he indicated for me to sit in the chair across from him. Without preamble, he began to chant a single word over and over and over. He raised his hand to indicate for me to join him. My tiny adolescent voice joined in.

After a time he stopped and told me I could go into the next room now to practice. I was afraid I might forget the word. I went to the next room where there were another two chairs and one of the ladies that I knew. She told me that we would meditate for ten minutes. I sat and closed my eyes.

I never stopped hating it.

Some people said that they loved meditation, though I realized that most were struggling with it as I was. Some said that it brought them great peace and stillness. Others said that when they managed to actually do it, they were glad they had.

I continued to feel like it was boring and pointless.

It became a chore. Every day my parents would ask me if I had meditated yet. “No,” I would mumble.

“I’ll get to it!” I pouted as only a teenager can. Part of me felt like meditation was my parents’ thing. I wanted to distinguish myself. I wanted to do things my own way.

When we went on retreats, there was no choice. Our days there were tightly scheduled and regulated. Thirty minutes of meditation at dawn and dusk every day. Many mornings we did it outside in the hopes that the cold air would keep us sharp. Freezing and miserable, sitting on a hard chair, body aching with desire for sleep, can’t wipe away the stray hair in my face. I get tense now just remembering it.

Once I left home, I tried to keep meditating. It was like eating veggies that I hated. It was good for me. I had to do it.

But eventually I just stopped. I stopped feeling guilty about not doing it. I saw that most people didn’t meditate. It wasn’t like brushing my teeth, which I could see the purpose of doing every day.

Which brings me to now. I’m a religious person, dedicated to purifying my soul and attaining enlightenment, and yet I have a very strong resistance to meditation.

My boyfriend meditates. He practices a few different types. One is a standing meditation, which he can do for an hour at a time. I have never stood still for an entire hour. I can’t even imagine. Then there’s the Buddhist meditation retreats he goes on where he spends a week doing eight hours a day of meditation. Makes me cringe to think about it!

There are so many different kinds of meditation. There really ought to be one I can do.

I should find a way to work through this resistance I have.

What do you think? How important is meditation to the spiritual practices of a Hindu? Should I force myself to do it because it is good for me or should I focus on other practices to purify the mind?

By the way, the cartoon up there is from meditationcartoons.com which is a really fun site. I hadn’t ever seen it before, but apparently they have a book of cartoons about meditation. I think I need to get that as a gift for my parents! 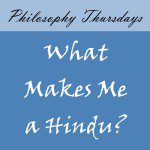 January 3, 2013 What Makes Me A Hindu?
Recent Comments
5 Comments | Leave a Comment
Browse Our Archives
get the latest from
Hindu
Sign up for our newsletter
POPULAR AT PATHEOS Hindu
1