A couple of years ago my family and I went to India to visit his ashram in Sringeri.

He is quite a young man for a guru, but has gained great respect the world over. I heard a funny story that one of the people who does the accounting for several different ashrams and gurus recommends Sri Bharati Tirtha. Apparently, his taxes don’t reveal a hypocritical lifestyle as some do!

I found being in his presence to be very intense. I felt uncomfortably as though he could see straight through my skin and into my heart.

Though pictures of him often show a serious looking man, in person he is bright and cheerful with a ready smile.

A biography of the guru is at Sringeri.net.

He teaches Advaita/Smartha tradition, which is the branch of Hinduism my family and I follow.  Adi Shankara was a great philosopher who revolutionized Hinduism two thousand years ago. His commentaries on the scriptures are the basis for Advaita today.

What is Advaita Vedanta?

The doctrine of advaita vedanta as expounded by Sankara can be summed up in half a verse: “Brahma Satyam Jagan Mithya Jivo Brahmaiva Na Aparah“ — Brahman (the Absolute) is alone real; this world is unreal; and the Jiva or the individual soul is non-different from Brahman. This is the quintessence of his philosophy.

According to Sri Sankara, whatever is, is Brahman. Brahman Itself is absolutely homogeneous. All difference and plurality are illusory. 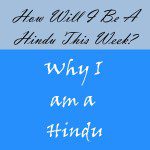