Patheos Explore the world's faith through different perspectives on religion and spirituality! Patheos has the views of the prevalent religions and spiritualities of the world.
Ram Das is an American Hindu (born in the Boston area, just like me!) who I think is most famous for the book Be Here Now

. He’s not necessarily a guru, per se, but he has taught and explained the ideas given to him by his guru and has a foundation and a following.

Ram Das’s name was originally Richard Alpert and he was born to a Jewish family in Massachusetts in 1931. He was given his Hindu name by his guru,  Neem Karoli Baba. Before traveling to India and meeting the guru, Ram Das was exploring psychedelic drugs in his quest to understand life. He was a prominent figure in the counter-culture revolution that was the 1960s and 70s in America.

From the blog at RamDas.org:

The most important aspect of love is not in giving or the receiving: it’s in the being. When I need love from others, or need to give love to others, I’m caught in an unstable situation. Being in love, rather than giving or taking love, is the only thing that provides stability. Being in love means seeing the Beloved all around me.

I think learning more about Ram Das is important for me because he is a non-Indian Hindu like me. In particular I found this quote very meaningful…

At 60 years of age, Ram Dass began exploring Judaism seriously for the first time. “My belief is that I wasn’t born into Judaism by accident, and so I needed to find ways to honor that,” he says. “From a Hindu perspective, you are born as what you need to deal with, and if you just try and push it away, whatever it is, it’s got you.” –Wikipedia

For me, I was born into a form of Hindu philosophy that wasn’t tied to tradition and history in the same way that Indian Hinduism is. I think that allowed me the freedom to see what elements of Hindu belief are the most important. If I had been born into an Indian family, I think I may have become distracted by ritual and not explored the meaning behind it. What I was given instead in this birth was the opportunity to see the meaning without the ritual and then to find and enjoy the ritual as a way to enhance those truths. 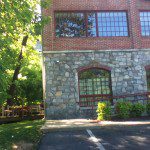 June 12, 2013 Three Lessons to Learn from Bridezillas
Recent Comments
1 Comment | Leave a Comment
Browse Our Archives
get the latest from
Hindu
Sign up for our newsletter
POPULAR AT PATHEOS Hindu
1