Yogananda has been the gateway into Hinduism (or at least Hindu philosophy) for many westerners.  It was in 1920 that he came to America to speak at a religious council and founded his Self-Realization Fellowship. People continue to find his teachings through his book Autobiography of a Yogi.

He was born in 1893 in India (Uttar Pradesh, to be specific). He graduated from college and then became a disciple in a monastic Swami order. At 27 he went to America, where he spent most of his life. It is said that he knew exactly when he was going to die and did so in a meditative way.

Yogananda wrote down his Aims and Ideals for Self-Realization Fellowship/Yogoda Satsanga Society:

“Self-realization is the knowing – in body, mind, and soul – that we are one with the omnipresence of God; that we do not have to pray that it come to us, that we are not merely near it at all times, but that God’s omnipresence is our omnipresence; and that we are just as much a part of Him now as we ever will be. All we have to do is improve our knowing.”

My dad recommended the Autobiography of a Yogi book to me but I haven’t read it yet. I think next time I am at the library, I will look for it. I can especially appreciate his belief that all true religions hold a common core of Truth that is scientific and unifying. Ideas like that have had a strong influence on my life.

Yogananda wrote the Second Coming of Christ: The Resurrection of the Christ Within You…to reveal the complete harmony and basic oneness of original Christianity as taught by Jesus Christ and original Yoga as taught by Bhagavan Krishna; and to show that these principles of truth are the common scientific foundation of all true religions. –Wikipedia

Seriously, that sounds like someone I want to hear more from!

“Man is the highest being in creation, because he aspires to freedom.”

“When you learn to live for others, they will live for you.”

“You have come to earth to entertain and to be entertained.” 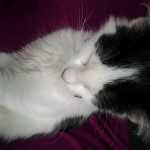