We are doing a scripture study together: reading along through some scriptures and discussing the passages. Today is the fourth and final post on the Kena Upanishad. The previous scripture was the Isha Upanishad (find all Scripture posts here) 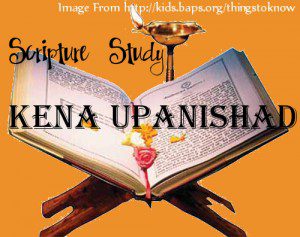 Last time the reading ended on quite a cliff hanger. Read back to refresh your memory: Kena Upanishad Chapter Three

She replied: “It is, indeed, Brahman. Through the victory of Brahman alone have you attained glory.” After that Indra understood that It was Brahman.

Since they approached very near Brahman and were the first to know that It was Brahman, these devas, namely, Agni, Vayu, and Indra, excelled the other gods.

Since Indra approached Brahman nearest, and since he was the first to know that It was Brahman, Indra excelled the other gods.

This is the instruction about Brahman with regard to the gods: It is like a flash of lightning; It is like a wink of the eye.

Now the instruction about Brahman with regard to the individual self: The mind, as it were, goes to Brahman. The seeker, by means of the mind, communes with It intimately again and again. This should be the volition of his mind.

That Brahman is called Tadvana, the Adorable of all; It should be worshipped by the name of Tadvana. All creatures desire him who worships Brahman thus.

The disciple said: “Teach me, sir, the Upanishad.”

Austerities, self-restraint, and sacrificial rites are Its feet, and the Vedas are all Its limbs. Truth is Its abode.

She (Uma) said: “It is Brahman. It is through the victory of Brahman that ye are victorious.” Then from her words, he (Indra) knew that it (that mysterious form) was Brahman. Uma replied to Indra, “It is to Brahman that you owe your victory. It is through His power that you live and act. He is the agent and you are all only instruments in His hands. Therefore your idea that ‘This victory is ours, this glory is ours,’ is based on ignorance.” At once Indra saw their mistake. The Devas, being puffed up with vanity, had thought they themselves had achieved the victory, whereas it was Brahman; for not even a blade of grass can move without His command.

Therefore these Devas,–Agni, Vayu and Indra–excel other Devas, because they came nearer to Brahman. It was they who first knew this spirit as Brahman.

Therefore Indra excels all other Devas, because he came nearest to Brahman, and because he first (before all others) knew this spirit as Brahman. Agni, Vayu and Indra were superior to the other Devas because they gained a closer vision; and they were able to do this because they were purer; while Indra stands as the head of the Devas, because he realized the Truth directly, he reached Brahman. The significance of this is that whoever comes in direct touch with Brahman or the Supreme is glorified.

Thus the teaching of Brahman is here illustrated in regard to the Devas. He dashed like lightning, and appeared and disappeared just as the eye winks. The teaching as regards the Devas was that Brahman is the only Doer. He had appeared before them in a mysterious form; but the whole of the unfathomable Brahman could not be seen in any definite form; so at the moment of vanishing, He manifested more of His immeasurable glory and fleetness of action by a sudden dazzling flash of light.

Next (the teaching) is regarding Adhyatman (the embodied Soul). The mind seems to approach Him (Brahman). By this mind (the seeker) again and again remembers and thinks about Brahman. Only by the mind can the seeker after knowledge approach Brahman, whose nature in glory and speed has been described as like unto a flash of lightning. Mind alone can picture the indescribable Brahman; and mind alone, being swift in its nature, can follow Him. It is through the help of this mind that we can think and meditate on Brahman; and when by constant thought of Him the mind becomes purified, then like a polished mirror it can reflect His Divine Glory.

That Brahman is called Tadvanam (object of adoration). He is to be worshipped by the name Tadvanam. He who knows Brahman thus, is loved by all beings. Brahman is the object of adoration and the goal of all beings. For this reason he should be worshipped and meditated upon as Tadvanam. Whoever knows Him in this aspect becomes one with Him, and serves as a clear channel through which the blessings of Brahman flow out to others. The knower of God partakes of all His lovable qualities and is therefore loved by all true devotees.

The Upanishad is based on tapas (practice of the control of body, mind and senses), dama (subjugation of the senses), karma (right performance of prescribed actions). The Vedas are its limbs. Truth is its support.

Some commentary about it…

The prevailing note of all Vedic teaching is this: One tremendous Whole becoming the world, and again the world merging in that Whole. It also strives in various ways to define that Source, knowing which all else is known and without which no knowledge can be well established. So here the teacher replies: That which is the eye of the eye, the ear of the ear, that is the inexhaustible river of being which flows on eternally; while bubbles of creation rise on the surface, live for a time, then burst.

The teacher, however, warns the disciple that this eye, ear, mind, can never perceive It; for It is that which illumines speech and mind, which enables eye and ear and all sense– faculties to perform their tasks. “It is distinct from the known and also It is beyond the unknown.” He who thinks he knows It, knows It not; because It is never known by those who believe that It can be grasped by the intellect or by the senses; but It can be known by him who knows It as the basis of all consciousness.

The special purpose of this Upanishad is to give us the knowledge of the Real, that we may not come under the dominion of the ego by identifying ourselves with our body, mind and senses. Mortals become mortals because they fall under the sway of ego and depend on their own limited physical and mental strength. The lesson of the parable of the Devas and Brahman is that there is no real power, no real doer except God. He is the eye of the eye, the ear of the ear; and eyes, ears, and all our faculties have no power independent of Him. When we thus realize Him as the underlying Reality of our being, we transcend death and become immortal. (Read more at http://www.yoga-age.com/upanishads/kena.html)

I think it’s interesting that the text says “Only by the mind can the seeker after knowledge approach Brahman.” I can see why Brahman has been the God of the jnana (knowledge/study) path. It seems to me that the mind is still too limited to really perceive the all-present God, but perhaps the mind is capable of stretching to that capacity when we exercise it.

To me it doesn’t matter whether we call this force behind everything Brahman or anything else. The name isn’t what makes it. There is a source behind all action and here we are calling that Brahman, but it is more important to work at understanding that there is a force behind all action than it is to call that force by a particular name. (And speaking of “force”, I would argue that it is this Brahman that is being referenced in the Star Wars movies).

I really love this part: “Austerities, self-restraint, and sacrificial rites (tapas, dama, karma) are Its feet, and the Vedas are all Its limbs. Truth is Its abode. He who thus knows this Upanishad shakes off all sins and becomes firmly established in the infinite and the highest Heaven” However, is it right that the first translation gives “karma” as the word and the second calls that “sacrificial rites”? Because that isn’t what karma is! Right action goes far beyond particular rites. I’m a little disturbed by this discrepancy. 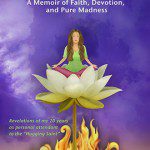