You always know that there are people who struggle with infertility. What are the odds that you’re going to be one of those people, though?

Each time someone you know gets pregnant, you wonder if that means it’s more likely that you’re going to be the unlucky one, holding the short end of the stick.

You never really think it’s going to be you.

In a couple of weeks Brad and I will hit an official infertility diagnosis. One year of unprotected, well timed sex without producing any pregnancy.

Last week I went to see a fertility doctor and after a few tests he is becoming more and more convinced that I likely have PCOS, the most common diagnosis for infertile women.

In some ways, this news is positive. Maybe now we know what’s going on and we can take steps to counteract it.

On the other hand, I know that this is only the start of tests and drugs and treatments. Things I wanted to avoid. PCOS comes with it other medical issues, such as an increased risk of diabetes (and I’m already over weight).

If I were like most of the other women in my family, I’d already have a baby now. Even given a few months of trying we still would have had a baby now.

My heart is breaking that we don’t.

Next week is my 32nd birthday. When I was born my mother had just turned 32. I feel behind in everything. I feel like I’m losing at life, that I’m in last place, that I’ll never catch up. I know those feelings are stupid. How is it a race? But I feel them anyway.

I’m angry that I didn’t know about this sooner. How could I have PCOS and not know it? Why didn’t I pay more attention to the timing of my cycles? Why didn’t I demand a better explanation when I had issues around this in college? Would it make any difference if I had known sooner?

If I had been lucky, I would never have to figure out the moral ambiguity that I feel around medical intervention for pregnancy. I could have happily kept judging people for it without having to know their pain (Not really. I try very hard not to judge people whose shoes I’ve never walked in).

Now I have to decide how far am I willing to go?

I want children with a desire that is unlike anything I’ve ever felt before. It overpowers me. I want it more than I’ve ever wanted anything.

But do I deserve it? If I take steps to force it to happen, will the universe punish me with awful children? Are these fears ridiculous?

{Just to clarify, this is my very personal feelings on the subject. Someone complained on my last post on the subject that I was wrong to say this is the Hindu view on the subject of medical intervention for pregnancy. I didn’t mean to say it was THE Hindu view. It is my thoughts and feelings and I’m a Hindu. These things are not entirely unrelated.}

If I can’t have children, what is there for me? Where do my dreams and hopes and desires go? All I ever asked the Gods for was a husband and a pile of children. All my life I’ve wanted a big family. I’ve never asked for career success or lots of money. All I wanted was a family.

I don’t know what I’ll do if I can’t have that.

And people act like it’s my own fault, like I brought it on myself. They whisper that I waited too long. But what choice did I have? I tried to get married sooner. I tried to start having a family a decade ago, but it turns out that you can’t force people to marry you. Certainly in America you can’t. It took me this long to find a man who could be the father of my children. I didn’t have any control over that.

I feel myself sinking and every friend’s child is like adding a new weight around my ankle, dragging me further down. Facebook is like being stabbed in the heart over and over and over. Not that I don’t want my friends to post their pictures! If I ever get the chance, I’ll be posting a ton of photos myself. I’m happy for my friends, but I’m also horrifyingly envious and it’s an ugly emotion.

I’m in a dark, dark place right now and I’m trying to learn to think differently about fertility treatments and interventions. It’s fighting against all my instincts. I can’t help feeling like if I can’t have a child naturally then I’m not supposed to have one and if I force the universe to give me one that I’ll be punished in some way. That’s deeply, deeply ingrained.

People made some great comments on my last post encouraging me. I might need to write them all down and carry them around with me to remind me that it’s okay to do fertility treatments.

One really great point was that it’s only my job to show up and do the work. The result is up to the Gods. It’s the message of the Gita, after all. Do what is yours to do and do it to the best of your ability, then the results take care of themselves.

But then I think, I want the fruits of the action. I have desire for the result of a baby.

My husband told me the story of a man whose house was burning and he said, “Ah well, it is the will of God, that’s okay.” But then a person came along with water to help put out the fire and the man turned him down. The person with the water was God.

Can I reframe the way I think about the doctors? See them as bringing God’s will to fruition?

I’m realizing this goes back to my very hippie instincts. Truth be told, as ashamed as I am to admit it, my instincts lean anti-vaccine. This is a big debate in America right now and science shows that vaccines are not causing harm to children, but it’s so hard to believe it because parents are just seeing big syringes of drugs being pumped into their tiny children, you know? So my instincts are to go more “natural” but I know it’s not right. I have done the research and learned and I know that vaccines are super important and they are not causing harm.

I’m someone who hates to take pain medicine for a headache. I feel extremely reluctant to take action. I like to let my body fight things. But then I realize that I’m selective about this being natural thing. I eat some awful processed foods. I’m no vegan 🙁 So really I’m being a hypocrite.

What I need to fight against is my in-born tamasic nature. We all have different combinations of the guna qualities and I happen to have too much tamas, which is inertia and laziness. I have a strong tendency not to act, to be passive.

A few weeks ago at Sathya Sai Baba discussion group we were reading material that was showing how the Gita instructs us that we must act. There is no honor in being passive. The reading even said that not acting at all was WORSE than taking the wrong action. That’s a big wake-up call for me. I try to tell myself that standing back and not doing anything is the spiritual choice, but it’s not. We’re in this world to interact and to do (while also realizing that the Self in our core is still and at peace within that action).

My parents are coming to visit this weekend and I hope that they will be able to convince me that it’s okay to take the fertility drugs. 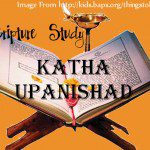 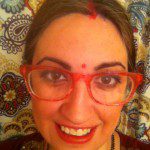