UPDATE: I’ve caused some offense to my friends and I must apologize.  I didn’t realizehow the tone here comes across. I did not intend to be judgmental or to say that I’m somehow a “better” Hindu than others. My intention was to show that there is variety in us non-Indian Hindu practictioners but I work hard to not judge other people’s spiritual lives. There’s no way to compare! My tone may have been influenced by reading the opinions of Indian American young women who find hippies disengenous and offensive. I guess I felt like I had to show I was different than that. #NotallWhitePeople, right? We all make mistakes and I hope that you’ll all forgive me for this one. Please know that what I’m trying to say in this post is NOT that I am Hindu and this beautiful women I’ve pictured is not, but rather that not all western Hindus fit the same mold (or any mold).

It took me a while to realize that when people think of westerners identifying as Hindu, this is what they imagine: 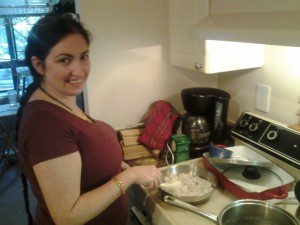 I just found out about this brand recently because I have a coworker who used to work for them. Apparently they make nice looking sweatpants. People like to wear them to do yoga. I’m sorry to say when I wear sweatpants, they’re from Old Navy or Goodwill. I don’t like to spend money on clothes (or at all, really).

Pot/weed/marijuana and hippies apparently just go together. I’ve never tried it. I don’t particularly have anything against it and certainly I have friends who like it, but I don’t like to modify my mind externally. That’s what meditation and Hindu disciplines are for! It’s really important to me to stay fully in control of my mind and intellectual capacities. The mind will run wild if you let it, but there’s a lot of peace to be found in learning to be its master.

Speaking of yoga and clothes to do it in, I don’t do it. I’m sure yoga is great, lots of people love it (especially in the west!) but I find it difficult to participate in classes where the teachers know little about the religion yoga comes from. (Not true of all teachers, but it can be difficult to find one well versed in Hinduism). I do have friends who participate in a rigerous and authentic tradition (it sounds terrifying, actually, in terms of discipline!) but the run-of-the-mill yoga studios that are all over America just leave me feeling frustrated and annoyed most of the time.

There’s a perception that we western Hindus are searching for something cool and exotic that we’ll dive into for a while and then give up and go on to something else. For some perhaps they only want Hinduism and eastern philosophy to serve as a contrast to the familiar culture they are bored with. Eventually that rebellion will probably die down and they’ll be going to a nice liberal church and a Buddha head statue on the window sill will be the only thing left from their days espousing anti-materialism and the evils of capitalism.

For me personally, I’ve identified as Hindu for ten years now and I’ve been practicing Hindu principles for a lot longer than that. I’d say it’s not just an rebellion against my own culture.

I don’t have any tattoos. Another thing that I’m not against, but I have little interest in it for myself. In the west tattoos have become very common. It’s probably equal now to people piercing their ears. There used to be a perception of it that only “bad” people would have tattoos, but that attitude has shifted dramatically in the last fifty years.

The only issue I can think of with getting a tattoo as a Hindu is that it wouldn’t be appropriate to get one of the image of a God or Goddess. When we approach the Gods, we do so in a clean state and in a respectful manner. You wouldn’t want the God with you while you were showering, going to the bathroom, or having sex. At least, that’s how I see it.

“I think that the super-majority of them, this whole Eastern Fetishism is a form of escapism, and therefore, it’s exotic…These hipsters/hippies/eastern escapists romanticize all that is not Judeo-Christian, and they seem to conflate many disparate cultures together. They eschew Christianity, even the very progressive sects like the Unitarians or this new Pope Francis. They love all things Tibetan, and a person’s Tibetness here validates them in all things spiritual, is what I’ve noticed.” –Reddit

I can’t say that I know much about the situation in Tibet. I hear bits and pieces about it and I agree that saying “Free Tibet” is an indicator of being one of the cool kids in the west. Politics is something that I don’t feel qualified to speak about and I really have difficulty grasping. I’m glad that there are people who are passionate about politics and how it intersects with human rights. I think the Tibet issue is one that is of more pressing concern to Buddhists and that’s an example of how westerners who “fetishize” eastern religions conflate them all together. (Though human rights should, of course, be a concern to all of us!)

6. Only Knows a Few Gandhi and Gita Quotes

Gandhi and Gita quotes are both awesome, but there’s a lot more to Hindu philosophy. I think I have demonstrated that I have a more in-depth understanding of my religion than that over these last few years!

So that’s a bunch of ways that I’m different from the stereotype, but that doesn’t mean that someone who fits every single stereotype can’t also be a Hindu!

Indian Hindus may always be skeptical of my kind and that’s certainly fair. There are people out there who use our religion to be trendy or feel “exotic.” {See more about that at this Tumblr: YouAreNotDesi} But sometimes those cringe-inducing cultural appropriators are simply taking the first step towards a life that will be devoted to Hinduism. We just don’t know someone else’s spiritual life from the outside. 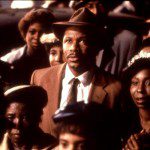 June 12, 2014
Peaceful Resistance is Not Being a Doormat
Next Post

June 14, 2014 Movie Club: Paa Discussion
Recent Comments
53 Comments | Leave a Comment
Browse Our Archives
get the latest from
The White Hindu
Sign up for our newsletter
POPULAR AT PATHEOS Hindu
1