We are doing a scripture study together: reading along through some scriptures and discussing the passages.

70. Like the ocean, which becomes filled yet remains unmoved and stands still
As the waters enter it,
He whom all desires enter and who remains unmoved
attains peace; not so the man who is full of desire.

71. The man who abandons all desires
Acts free from longing.
Indifferent to possessions, free from egoticism,
He attains peace.

72. This is the divine state, Arjuna.
Having attained this, he is not deluded;
Fixed in it, even at the hour of death,
He reaches the bliss of God.

“The man who is full of desire” is the word kaamakaami, which is literally translated as “desirer of desires.”

Interestingly, the “bliss of God” is brahmanirvanam. Notice the word “Nirvana” in there, as in the Buddhist word for the ultimate truth. Literally meaning to cease to exist or “blown out” like a candle. The complete word here means basically to lose oneself completely in God.

The ocean is full unto itself and always maintains the same form even though countless rivers enter into it. Whether the rivers enter or do not enter, the ocean is unaffected and undergoes no difference. Similarly when the senses of one in transcendent meditation come in contact with sense objects such as sound and it enters into the sense vector of hearing and is apprehended by the ears such a one still remains peaceful and maintains an equipoise state of consciousness…The word kamas means desires or those things which one wishes to enjoy such as taste or touch. Lord Krishna is instructing that whoever can relinquish these desires is free from craving, free from my-ness the conception that these things are mine and free from I-ness, my-ness and the conception that I am this body. Such a one not bewildered does misidentify the physical body as being the soul, rather such a one perceives the soul and attains peace. –Ramanuja’s Commentary

Here it is clearly stated that one who has internally renounced the desire for sense objects equipoise by the association of those coming on their own accord and not hankering for those that are not appearing on their own accord, free from false ego of thinking doership and devoid of any conception of proprietorship of anything, accepts whatever comes as a result of past actions, attains peace of mind. –Sridhara Swami’s Commentary

Lord Krishna extolling the virtues of the process of spiritual knowledge concludes chapter two with this verse enunciating the performance of actions by being unattached to their rewards. This state of consciousness leads to self-realisation and brahmi the ultimate truth. Having achieved this one never again deluded by the material energy. Nor does one experience the feeling of I or mine in relationship with the physical body. Even if one becomes established in this state at the last moment when death has come still one will achieve the eternal spiritual attainment. –Kesava Kasmiri’s Commentary

I just absolutely love the images in these verses. The ocean unmoved by water coming into it or not, is a great metaphor for a person in deep stillness and satisfaction.

It’s impressive to think that one could be fixed in such a state at all times, even at death. I definitely aspire to be that calm in the face of death. 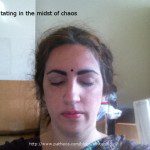 June 4, 2015
Standing Still in the Midst of Action
Next Post 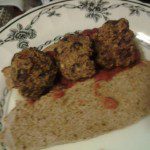 June 10, 2015 My New Favorite Cookbook
Recent Comments
1 Comment | Leave a Comment
Browse Our Archives
get the latest from
The White Hindu
Sign up for our newsletter
Related posts from The White Hindu