From the Patheos archive:

‘Tis the season to argue about religion. Or more specifically, to feud about whether to say Merry Christmas or Seasons Greetings…to call it a Christmas Village or a Holiday Village…or to allow a crèche or menorah to stand on public property.

What would Americans at the time of our nation’s founding think about all this? They would have been perplexed. Perplexed, first, at the ways that we fuss about the public role of religion. As I discuss in God of Liberty, the Revolutionary era was shot through with public expressions of faith, from the days of prayer and fasting declared by presidents, to the chaplains employed by the Continental Congress and Washington’s army, to the faith principles undergirding the Revolution itself, especially the notion that all men are created equal. The concept of a public square stripped of religion would have been deeply unfamiliar to Americans in 1776.

But they would also find our kind of Christmas strange, and probably unpleasant. We are constantly warned by the prophets of our age–Charlie Brown and Snoopy chief among them–that we should not become obsessed with commercialism at Christmas. Yet this is like warning fish about the pollution in water–a world of consumption is what we Americans live and breathe in.

Christmas in 1776 was very different. One difference, of course, is that America was engaged in a terrible war with Britain. That is why George Washington and his army spent Christmas night of 1776 crossing the Delaware River through a blizzard of sleet–to attack the Hessians at Trenton, New Jersey.

Wartime or not, Christmas was not a big public spectacle at the time of the Founding. One searches in vain through the newspapers and almanacs of the Revolutionary War period to find references to Christmas. It was almost never mentioned, even on December 25 itself. When it was, the holiday was usually only cited as a reference point. (“General Washington hopes that the war will be over by Christmas,” and such.)

But let’s not be romantic about their simple, subdued Christmas, either. One reason that Christmas was downplayed in the New England states is because the Puritan fathers had banned Christmas for much of the seventeenth century. This was not because they were killjoys, but because they did not see how the Bible taught a December Christmas. They believed that the festival of Christmas was invented by medieval Catholics–and this was never a good thing, if you were a Puritan.

You did see occasional evidence of commercialism in Revolutionary America, too, especially after the war was over. In the Christmas Eve edition of Rivington’s New York Gazette for 1783, there was a screaming advertisement–almost reminiscent of our “Black Friday” ads–for “CHRISTMAS and NEW YEAR’S PRESENTS,” which included gold and silver watches; goblets fit for drinking “Porter, Ales, Punch, Sangree” and other holiday beverages; and assortments of stockings which the merchant pronounced “Monstrous Cheap.”

Christmas at the time of the founding–for those who embraced it–was mostly a family and church affair. Lauren Winner’s delightful book A Cheerful and Comfortable Faith shows how Christmas occurred naturally as a part of the household devotion of eighteenth-century Anglicans in Virginia. Wealthy families there often had sumptuous feasts. At one Christmas dinner, the menu of the Fairfax family included “six mince pies, seven custards, twelve tarts, one chicken pie, and four puddings.” Twelfth Night, the evening signaling the end of the Christmas season, saw even bigger bashes, which could sometimes turn into drunken brawls. Devout Anglicans also made their way to church for the Sunday of Christmas week, where they would hear a special sermon on the incarnation, and receive communion.

In modern America, outdoor nativity scenes and other Christmas displays became common after World War I, encouraged by the advent of electricity to light them at night. Some of these displays ended up on government property, a circumstance which predictably elicited lawsuits by secularists. The first major lawsuit on this topic sought to remove a nativity scene from the White House Ellipse in 1969. A number of contradictory court decisions have followed, fostering annual feuding and court cases regarding Christmas or Hanukkah displays.

Americans of 1776 had no particular need for public manger scenes. Christmas, when observed, fit easily in the traditional rhythms of home and church life. Obviously, they had no secularists screeching for the removal of Baby Jesus from the public park, either. His image was not there in the first place, nor did it need to be. Their society was already pervasively religious, even though not every American was a saint. They lived in a serenely religious milieu that we can only approximate today. We certainly can’t recreate it on today’s fractious courthouse square. Thankfully, believers can still foster an indisputably Christian Christmas in our homes and churches. I guess that is where Christmas is the most edifying anyway. 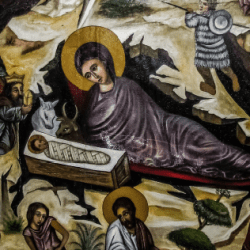 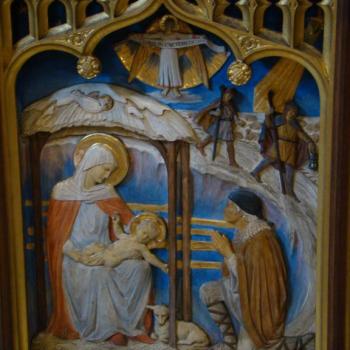