I have been working recently on the survival of ancient alternative gospels and other scriptures through the Middle Ages and Early Modern period.

Ireland especially was a staggeringly rich treasury for “lost” early Christian texts. This would be so important because of the critical role that Irish monks played in the conversion of England and Scotland in the sixth and seventh centuries, and their activity through much of Western Europe over the next two hundred years. This influence reached its height with the so-called Carolingian Renaissance associated with the Emperor Charlemagne from the late eighth century. Across France, Switzerland, Germany and Italy, some of Europe’s greatest centers of learning were founded either by Irish monks, or by their English disciples. Mapping their efforts often explains the movements of alternative scriptures, and their influence.

Ireland’s conversion to Christianity began in the fifth century, although the process probably took a century or more to complete. The country held a curious position in the Christian world. Lacking a history of Roman occupation, it had none of the political structures that shaped the church elsewhere. Without cities, bishops could have nothing like the same central role, and the church’s life depended on monasteries. Only with the English Conquest of 1170 was the Irish Church fully integrated into the standard Catholic structure and hierarchy. 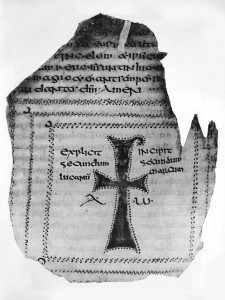 Yet if earlier Ireland existed outside the Roman political realm, it was unequivocally part of the wider cultural world. At least from the fifth century, well-known routes of trade and communication united Ireland and Western Britain with Spain and Western Gaul, and beyond that to North Africa and the Levant. Egyptian influences were particularly strong. Amazingly, we even find some knowledge of the Greek language in the Irish church, at a time when this was a very rare treasure indeed in most of Western Europe.

Not surprisingly, then, Irish monasteries held impressive collections of manuscripts that seem to have come from these ancient Christian territories, and they could have acquired them anywhere from the fifth to the tenth or eleventh centuries. 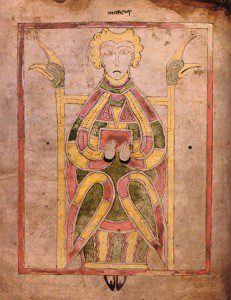 Successive conquests and cultural changes have taken a heavy toll of Irish libraries, but enough remains to show just how rich the apocryphal collections would have been. Modern scholars like Martin McNamara, Máire Herbert and David Dumville have painstakingly collected these records, discussing over a hundred items known in Ireland. Many are poetic elaborations of well-known stories, but we also find a full spectrum of widely known alternative texts. In many cases, the texts survive in the vernacular, in Irish Gaelic.

Irish churches were thoroughly familiar with such Old Testament apocryphal texts as the Life of Adam and Eve, the Apocalypse of Moses, and Jubilees. From the New Testament apocrypha, they knew the Epistle to the Laodiceans, multiple versions of the Descent into Hell, the Letters to Abgar, Pseudo-Matthew, the Infancy Gospel of Thomas, and all the standard Lives of the Apostles. 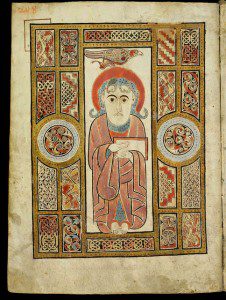 Surprisingly, Irish clerics had direct knowledge of the Protevangelium, the Infancy Gospel of James, which is the source of so much legendary lore about the Virgin Mary and her family. This work was very well known in the Greek and Syriac-speaking Eastern world, but far less so in the Latin West. Most of Western Europe, in fact, adapted the material into the gospel known as Pseudo-Matthew. Ireland, though, knew this Eastern text first hand, among many others.

Writing of the Magi who sought the baby Jesus, one medieval book records the range of different pseudo-gospels that offered some light on the event: “This is what James of the Knees says in his Gospel of the Children…. This is what Matthew son of Alpheus said in this Gospel, and in Libro de Infancia Mariae, ie in the book in which is narrated the Birth of Mary.” The wonderful name “James of the Knees” refers to Jesus’s brother, reputedly so devout in prayer that his knees were as callused as the skin of a camel.

Irish writers were so at home with such works that they freely adapted them into their story-telling. When St. Joseph sees the Magi approaching, he calls his son Simeon and tries to explain their odd behavior: “I fancy, my son, that it is the omen art of the druids, and it is soothsaying they are practicing, for they take not a single step without looking up, and they are discussing and communing one with another among themselves.” They are in fact describing the Three Wise Druids – or rather the Seven, as Irish sages usually claimed.

As sources for sober history, we need not pay too much attention to some of these texts. In other cases, though, tantalizing hints suggest some of the real gems that might have been available to the Irish church, including some early alternative gospels. I’ll talk about these in a future post.

Apostasy: U.S. Episcopal diocese first lesbian bishop
The first openly "lesbian bishop" has been "consecrated" by the Episcopal Diocese of...
view all Evangelical blogs
What Are Your Thoughts?leave a comment
Copyright 2008-2020, Patheos. All rights reserved.