Giving Cotton Mather his due 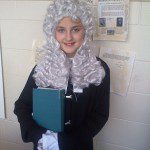 This year marks the 350th anniversary of the birth of Cotton Mather (1663-1728).  Descendant of leading Puritan ministers, defender of colonial liberties, esteemed pastor of a large Boston congregation, and enlightened proponent of science, Mather is an important figure in American colonial history.  Despite all his works—or maybe because of all his works—Mather has received harsh treatment in some historical accounts.  Nicknamed a prig, a“national gargoyle,” he sometimes has been squashed to fit the worst Puritan-to-Yankee caricatures.

The difficulty of translating Cotton Mather to a general audience was brought home last year when our daughter chose him as the subject for a school project.  Each child in the fifth grade had to dress up and present a biography of an American worthy who lived between 1650 and 1850.  But what to tell her classmates, besides the obvious attraction of that name?  (He was named after his grandfathers John Cotton and Richard Mather, both first-generation Massachusetts ministers.)  She found herself talking about witchcraft and smallpox, regular fixtures of Mather biographies. The former picks up accusations from Mather’s own day, linking him with the distorted legal process condemning colonists as witches in 1692.  In the latter, he backed inoculation to combat smallpox in a 1721 Boston epidemic.   Religion there was no enemy to science: a recent book, The Pox and the Covenant, presents Mather as the forward-looking mind against opponents of the procedure, including America’s Enlightenment hero, Benjamin Franklin.

Witchcraft, smallpox, and transition: Mather links some of the chief currents and events in colonial New England.  He came of age during painful change in the godly commonwealth, and passed away shortly before the Great Awakening. Mather wrote voluminously, sermons and exhortations and scholarly compendia, including the Magnalia Christia Americana, a multi-volume church history and biography of New England leaders, and Biblia Americana, a  commentary aiming to synthesize scripture and biblical criticism.

The Congregational Library in Boston marks the Mather anniversary this week with a  conference.  Re-evaluating his legacy, scholars promise a more estimable, even accessible, Mather.   Treating his approach to church music, women’s roles, history, colonial politics, and other topics, the conference aims to refresh our view of the learned, pious, influential Mather.

October 15, 2013 Slavery: America's Original Sin?
Recent Comments
2 Comments | Leave a Comment
"No-one can confidently answer your last question, but one thing I know, that those who ..."
Kostya2 The Resurrection of Johnny Rotten
"A church that tacitly supports lynching because "it's inevitable" is absolutely countenancing it.You say the ..."
swbarnes2 What We Can Learn from Pastors ..."
"This is a well-reasoned article seemingly backed up by valid data. Thank you."
Maine_Skeptic Refugees and the Enduring Cruelty of ..."
"The commentary on the Bible of Kralice (from 1579; https://en.wikipedia.org/wi... says this (my own translation ..."
mcepl I Gave Them Laws Through Which ..."
Browse Our Archives
get the latest updates from
Anxious Bench
and the Patheos
Evangelical
Channel
POPULAR AT PATHEOS Evangelical
1