For the February 2014 Patheos Book Club

With the publication of Birmingham Revolutionon the occasion of the Birmingham Campaign’s fiftieth anniversary last year, IVP Books provided a readable, well-informed, and smartly packaged work that can serve as either an introduction to those unfamiliar with the seminal events of spring 1963 or a refresher for those who need it.  As in his first book, Reconciliation Blues, Edward Gilbreath’s writing is engaging and fluid, without being trite and simplistic.

Published through IVP’s regular line, Birmingham Revolution targets a general audience, not the IVP Academic readership.  Even so, Gilbreath clearly comprehends recent trends in Civil Rights scholarship, incorporating those interpretive elements in his work.  For instance, instead taking a “great man” approach to the history of the Civil Rights Movement and focusing entirely on Martin Luther King, Jr., Gilbreath weaves the stories of less well-known leaders such as Fred Shuttlesworth (who never occupied a national stage) into the narrative, notes the important contributions of activist-pastor Vernon Johns and other local leaders, and highlights the shaping influence that black religious intellectuals such as Benjamin Mays and Mordecai Johnson had upon both King and the movement.

At the same time, Gilbreath does not downplay the pivotal role that King played.  He rebuts Ella Baker’s famous quip that “it was movement that made Martin, not Martin that made the movement,” by arguing that King’s “unique mix of ideas and gifts” transformed the movement, leading to its success (103-4).  Here, Gilbreath strikes the right balance.  In correctly emphasizing the contributions of others, King’s importance should not be ignored.  His ability to connect with people across social strata–black and white, rich and poor, educated and uneducated–distinguished him.  As television emerged as a national medium, this allowed King to rise as a transformational figure.  While others worked out of the limelight in legal and organizational efforts, King articulated a national vision for justice and equality, even while he embodied the fruits of opportunity for a white nation who doubted African American potential. 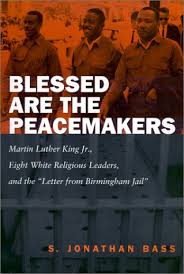 Further, Gilbreath captures much of the historical nuance surrounding the non-violent direct action campaigns associated with King in the 1950s and 1950s.  The Montgomery Bus Boycott would have failed without victory in the courts (55).  The failure of the Albany direct-action campaign refocused the movement, turning it towards economic instead of political confrontation (68), an adjustment that directly effected success in Birmingham (131).  Drawing heavily from S. Jonathan Bass’s work, Blessed are the Peacemakers, he even properly contextualizes the eight white ministers mentioned in King’s Letter from Birmingham Jail, assessing them with equanimity instead of the vitriol they so often receive.   Many other examples could be given.

In terms of the book’s argument, instead of focusing on King’s “I Have A Dream” speech, Gilbreath places the Letter from Birmingham Jail at the ideological center of the Civil Rights Movement.  The philosophical rationale for why non-violent direct action campaigns were just, justifiable, and necessary, Gilbreath sees the Letter as the theological foundation of the movement.  (In a strange turn, he even suggests it was co-written by God.)  It transcended its historical moment, exhorting readers towards justice.  Unlike the March on Washington speech, the Letter could not be misappropriated as a lets-all-get-along-and-be-color-blind sermon.  Something, Gilbreath rightly notes, contemporary conservatives have too often done.  Instead, it articulates King’s overarching concern with justice, a concern that led him to begin addressing fair housing, poverty, and war soon after Birmingham.  As a result, King’s ideology remains, in Gilbreath’s words, an “epic challenge to the church.”  Regardless of a person’s opinion regarding whether or not we live in a post-racial society, we certainly live in a society replete with injustices.

Throughout, Gilbreath fuses his own experiences and personal interviews into the narrative.  The stories of Pastor Michael Wesley, who was one of the first black students to attend a previously all-white school in Birmingham, and Janice Kelsey, who participated in the children’s campaign, enliven the story in ways that traditional histories do not.  Further, Gilbreath’s own reflections on race are never heavy-handed, even though they give thoughtful readers cause for reflection.  For that reason, white evangelicals would do well to read this book.  Although most will not find their political views bolstered, they should come away with more empathy for their black co-religionists.

I find very little to complain about in this book.  Gilbreath might have summarized less from the work of S. Jonathan Bass and Andrew Manis.  He ought to have said a bit more about the black preaching tradition of social protest and the importance of Gandhi’s philosophy.  Further, in Chapter 13, “King Among the Evangelicals,” Gilbreath should have teased out evangelical theological discomfiture with King a bit more as well as elaborating on his intentionally off-the-cuff comment that “the theological expression of Martin Luther King Jr. has more in common with the works of later and contemporary African American evangelical activists and scholars than it does with that of many operating in more traditional black church contexts today (162).”  Most likely, that discussion requires another book, one I hope Gilbreath will write.  In the meantime, everyone who can should enjoy this one.  Matching its author’s personality, it is lively, informative, and thought-provoking in a winsome manner.

February 28, 2014 WELSH ROOTS
Recent Comments
0 | Leave a Comment
"Actually, a couple of things are at work here. England was radically different because Common ..."
philipjenkins Of Revivals, Convulsions, and Witchcraft Panics
"As I understand it, in Spain, ironically, the witchcraft craze scarcely happened at all because ..."
Iain Lovejoy Of Revivals, Convulsions, and Witchcraft Panics
"All fair comments. I was mainly thinking of their relationship to the respective institutional churches. ..."
philipjenkins Of Awakenings, Convulsions, and Writing Christian ..."
"Oh, okay. I do see parallels in the sociological and emotional senses.I was thinking more ..."
Daniel Wilcox Of Awakenings, Convulsions, and Writing Christian ..."
Browse Our Archives
get the latest updates from
Anxious Bench
and the Patheos
Evangelical
Channel
POPULAR AT PATHEOS Evangelical
1